When a Loved One Has a Drug Addiction 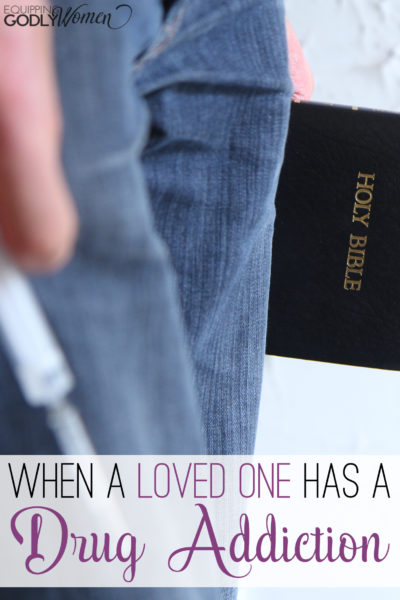 When they first told us that a good friend of ours was drinking too much, we didn’t believe them.

Sure, he drinks, we thought, but I doubt it’s really all that bad. After all, he’s a really great guy. Smart, kind, a Christian… he has a lot going for him! Definitely not the kind of guy you picture when you think of an alcoholic.

And yet, they were right. He was drinking too much–way too much–and it wasn’t long before it caught up to him.

He lost his job, his friends… and while I believe he’s sober now (we’ve grown apart), I can pretty much guarantee that his life now is not what it would have been if he hadn’t picked up that bottle.

The truth is, “addiction” — whether that’s to drugs, alcohol, sex, food, gambling or whatever else — doesn’t always look the way we think it should. It isn’t limited to “those people.” You know, the non-Christians, the people who don’t have a lot going for them…

With 12% of Americans ages 12 and older struggling with addictions, according to the National Center on Addiction and Substance Abuse, and another 24% at risk, there’s a good chance someone you know — perhaps even someone in your family — is currently addicted or dangerously close.

So how should you, as a Christian, respond when a loved one has a drug addiction? Here are your five steps.

As always, the first thing you should do whenever you are facing a challenging situation is to take it to God.

Pray that the devil would not be able to establish a foothold in your loved one’s life. That his or her eyes would be opened to the severity of the situation and what it is costing him/her. That you would have the courage to speak up when needed and the strength to be quiet when needed. That God would ultimately use the situation for HIS good and HIS glory.

But don’t stop there.

Yes, prayer is powerful and yes, God answers prayer. But sometimes the way He answers prayers is through the wisdom of the doctor, the warning of a good friend, the assistance of a much-needed medication or the reassuring connection with a trusted sponsor.

Sometimes, God wants to do big things, but He wants us to take action to help put His plan into motion too.

2. Don’t Wait Until People are “Better” to Love on Them

When a loved one is caught up in drug addiction, it’s all too easy to distance ourselves. After all, “good Christians don’t do those types of things,” we think, and we wouldn’t want to be negatively influenced.

And yet, what did Jesus do? He loved people right where they are.

Take the 12 disciples for instance. An extortionist, an extremist, a traitor… I love the colorful descriptions given in Relevant Magazine’s article Being a Christian Doesn’t Always Look Like You Think it Should. And did Jesus avoid these men, lest they tarnish his good reputation or negatively influence him in some way? Did he say, “Sure, I’d love to use you, but you have to go work on yourself first.”

No! He made them leaders of the church!

Suffering from a drug addiction is hard enough — suffering as a Christian is even worse at times, due to the extra guilt, doubt and seeming abandonment.

When people are truly struggling isn’t the time to say “Well, bye. Good luck to you!” It’s the time to lean in and love on them even more — struggles and all.

3. Remember that You Have Your Faults Too

After all, it’s not like you don’t have your own faults too…

Sure, maybe it’s not drug or alcohol abuse. But what about gluttony, gossip, or unforgiveness? Not to mention that every time you fail at Putting God First, that’s pretty much idol worship of whatever you’re prioritizing instead.

Yes, as Christians, we should judge. We should stand up and say “This is wrong. It is hurting you. You need to stop.”

But it absolutely has to be done out of a place of love and humility, recognizing that we’re all sinners in need of grace, just trying to do the best we can.

4. Encourage Them to Get Help

The first time you turn to drugs instead of God, it’s a sin. The second time, and the third time… But eventually there reaches a point when it’s not just about self-control any more.

No! You get them the help they need. Whether that’s medicine, therapy, rehab or whatever else.

Yes, your loved one might be resistant to getting help. No, they might not listen, and it’s not like you can exactly force them (at least, not all of the time). But the least you can do is try.

5. Realize That It’s Going to Be a Process

Of course, even if you do succeed in getting your loved ones help for a drug addiction, it’s important to realize that the journey doesn’t end there. Recovering from a drug addiction is definitely NOT an overnight process.

But that’s okay, because God is bigger than it all and He still has a plan — even when you don’t know what it is yet. Pray, talk to a professional and most important, hang in there. God’s not through with the situation yet.

Have you ever been personally affected by a loved one’s addictions or struggled with an addiction yourself? What helped you get through it?