Religion is Not a Dirty Word 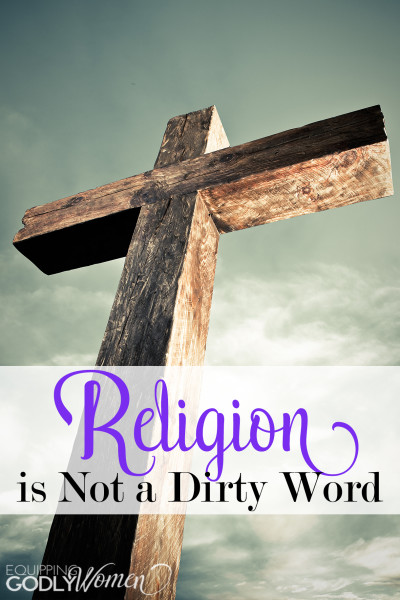 It’s a sentiment I’ve heard expressed a number of times now. The exact phrasing varies, but the message stays the same.

It sounds nice, warm and inviting. Makes it clear that Christianity isn’t just a bunch of arbitrary rules. It’s all about worshiping God and developing a relationship with Him.

The problem is: It isn’t true. Christianity IS a religion. And that’s okay.

You see, somewhere along the way, people have gotten a skewed view of what the word “religion” even means. The word has gotten quite the negative reputation. Because when you look at what the word actually means, it really isn’t offensive at all.

A Better Definition of Religion

Merrian Webster defines religion as “an organized system of beliefs, ceremonies, and rules used to worship a god or a group of gods.” (Source)

Reference.com defines religion as “a specific fundamental set of beliefs and practices generally agreed upon by a number of persons or sects.” (Source)

Oxford Dictionaries doesn’t even use the words “rules” or “practices” at all. Instead, it defines religion this way: “The belief in and worship of a superhuman controlling power, especially a personal God or gods.” (Source)

For the purposes of this discussion, I define “religion” as the beliefs and customs which a particular people use in order to worship the supernatural power they believe in.

So, what’s the problem then? Why do people find “religion” so offensive?

I decided to find out.

The Top Two Reasons People are Opposed to Organized Religion

To answer this question, I turned to Facebook. And of all of the answers people gave, the vast majority fell into one of two groups. (You can find the whole discussion here, if you’re curious)

People are opposed to organized religion because:

Completely understandable! I don’t blame people one bit for being wary of the church when they’ve been hurt before! I would be cautious too.

But, the thing is, we can’t “throw the baby out with the bath water” so to speak. Yes–we absolutely should take a stand against works-based Christianity. Christianity ISN’T just a bunch of rules and regulations. It ISN’T a place to be judgmental and hypocritical.

But that doesn’t mean we can throw out all of the rules altogether. Or just check out of church and never go again.

If you’ve been hurt by someone in the church before, let me be the first to say, I am so sorry! I wish no one would ever be hurt by the church, but unfortunately, we live in a fallen world and sometimes bad things happen to good people who don’t deserve it.

For the rest of this post, I’m going to focus more on the second reason–that Christianity isn’t meant to be just a bunch of rules–but here are a couple of other posts on the topic you might enjoy:

When a Spiritual Leader Lets You Down

Why Does God Allow Suffering?

On the other hand, if you are against Christianity being just a big set of rules we all use to judge each other by–me too! Keep reading.

Yes, Christianity Has Rules. God Put Them There.

1 Corinthians 14:33a says “For God is not a God of disorder but of peace.” This particular passage is about taking turns talking in church, but it’s a theme you can see all throughout the Bible.

God never says “Go do whatever you want. As long as your heart is right, we’re good.” Jesus never preached a sermon about “Well, as long as you try sometimes, that’s good enough.”

No, all throughout the Old Testament, we see God giving the Israelites VERY specific rules about what they were/were not to do.

Consider the instructions God gave to Noah when he was building the ark. Or the instructions he gave to the Israelites when they were setting up the tabernacle. It’s several chapters long and goes into great detail about what materials could be used, the sizes and shapes every piece would be, what the priests would wear… And then there’s The 10 Commandments–a set of rules Christians still emphasize strongly today.

And before you say “Oh that was the Old Testament…” (as if God cared about specifics then but not now), consider how much of the New Testament is made up of lists of rules and guidelines for behavior as well. (hint: it’s a lot)

God Himself Established Christianity as an Organized Religion

Whether Christians like it or not, the Bible encourages organized religion.

Honestly, to say that organized religion is wrong is to say that God didn’t know what He was doing. Because He was the one who set it up.

And the rules the Pharisees were following? Those were rules instituted by God himself. The Pharisees just took them too far. They got really good at following the rules, to the point of forgetting the purpose the rules were meant to serve in the first place.

And that’s not Christianity’s fault. That’s not God’s fault. That doesn’t mean the rules were wrong or bad. It just means that the Pharisees messed up. (Because they–like us–are human. It happens.)

So How Should We, As Christians, Respond to Organized Religion?

So, since it’s all about a balance, where should that balance be? Here’s what I would recommend.

1. Realize that organized religion itself isn’t the problem.

God didn’t leave us a bad system. The system He left us is just fine. It’s the people who are messing it up because we aren’t perfect. This is a very important distinction to make.

2. Recognize that rules are necessary.

God didn’t leave us rules because He’s a big ol’ meanie in the sky who doesn’t want us to have any fun. The rules He left us are for our own good. There is a reason God included all of the rules in the Bible that He did–even if we don’t understand what it is.

People make such a big fuss over Catholic traditions, but there’s really no reason for it. Again, it’s not the practices that are wrong, it’s when they take center stage to the point that we forget their meaning.

(And anyways, Protestants have plenty of their own traditions as well. Raising hands while singing, bowing your head to pray, the order of the service, lighting the unity candle at weddings, the specific words people use while praying…)

Yes, your relationship with God is more important than just following the rules, but it’s a little hard to preach on a relationship. Can a pastor stand up and say “Trust God!” and leave it at that? You’d leave church with more questions than answers. “How do I DO that? What does that mean? What does that look like?” Instead, it only makes sense that a pastor would focus on action steps.

Even as a blogger, can I just write “Go get close to God!” or “Go work on your faith!” or “Work on your relationship!” That’s not really helpful. But I can give you specific things to DO or think. It isn’t the main idea, but it will help nudge you toward the main idea.

5. Offer each other grace.

Yes, at some point you will come across a rude, judgmental Christian. Probably lots of them. But the good news is that you don’t have to let what they say or think affect you. You are both sinners saved by grace and God loves you just the same. And He expects you to be loving too–even if they don’t deserve it. Take the high road.

All of your Christian friends can give you ideas and suggestions for things you can do to grow in faith, but it’s up to YOU to make sure that happens.

And how will you make that happen? Well, that’s where religion comes in…

“What is organized religion and does the Bible support it?” — Compelling Truth

“How to Handle the “I Hate Organized Religion” Talk” — J. A. Medders