The Role of Faith in Belief 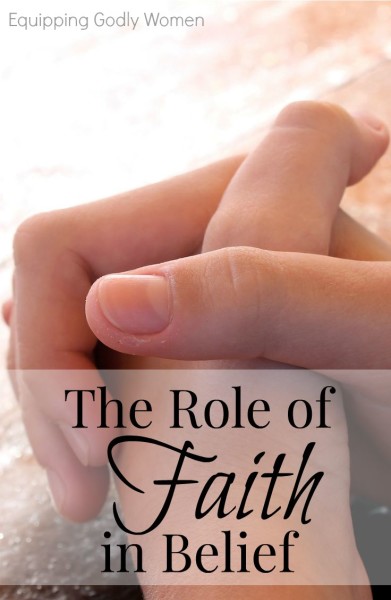 This is post nine in a series entitled Christianity: Fact or Fiction? Examining the Evidence you Need to Know. For an overview of the series as well as links to all of the posts as they publish, just click the link!

Over the last several weeks, I’ve done my best to provide you with tons of evidence and “proofs” in an effort to help strengthen your faith, answer any nagging doubts you may have and help you better share your faith with others. Hopefully, if you’ve been reading along, this series has done just that.

But the truth is, even if I gave you all the evidence, facts and proofs in the entire world–enough to completely squash any arguments or hesitations you might have, it still wouldn’t be enough. Knowledge is a great place to start. It’s a great way to break down any barriers and to strengthen your beliefs, but it isn’t enough by itself.

Consider the devil and his demons for one second. If anyone KNOWS God is God, they do. They used to be angels. They’ve seen God, worshipped God, experienced God… and yet it wasn’t enough. Despite all of the facts and knowledge they have, it wasn’t enough. They choose a different way.

The same is true for you. I can give you the evidence, answer many of your objections and build a solid case, but in the end, you still have to decide what you will do with the information–whether you will believe it, accept it, and live according to it or completely turn away.

And this choice–it requires faith.

Because the truth is, you’re never going to have all of the answers. There will always be things to question or struggle with and that’s good! Personally, I wouldn’t want to serve a God who was small enough to understand.

So when it comes down to it, all you can do is take what you know, make the best decision you can with the knowledge you do have, and take the rest on faith.

(Many of you saw this firsthand in my own life earlier this year when I did my Protestant vs. Catholic series. We looked at a LOT of persuasive evidence, and there were plenty of times when it seemed I was leaning one way or the other, but then I ended up not converting after all.)

Now, faith might seem scary, uncertain or reliable, but the truth is, we use faith every day. When you sit in a chair, you put your faith in the chair that it will hold you. When you drive your car, you put your faith in the other drivers that they will stay in their own lanes and in your car that it won’t break down. Faith simply means trusting when you don’t have enough evidence to know for sure.

For me, Christianity simply makes the most sense. The evidence is there. We’ve seen it and examined it. And I’m happy to trust God for the rest. After all, He knows what He’s doing a lot more than I do.