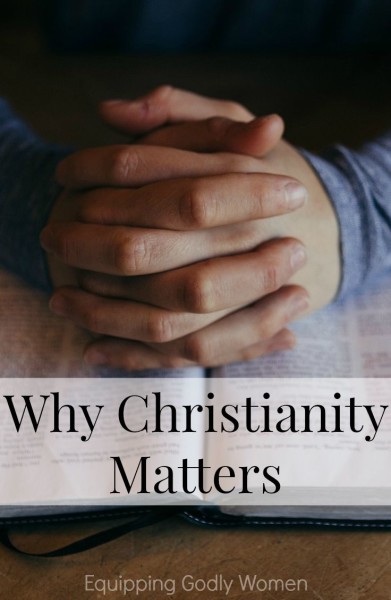 Today’s post is the last post in the Christianity: Fact or Fiction? Examining the Evidence You Need to Know series. Throughout this series, we’ve covered a lot of ground and discussed a great deal of evidence–evidence I believe is extremely convincing.

(Hopefully, you believe the same. If not, though, that’s okay. Email me and we’ll chat. I LOVE to chat 🙂 I won’t be pushy or overbearing or anything of that. We can just chat. I promise.)

But evidence alone isn’t enough. After all, knowing and doing are two very different things. You can know that Jesus probably really was the son of God, that he probably did really rise from the dead and that you probably do need to commit your life to him if you want to go to Heaven–and still not do it. Whether it’s because of laziness, uncertainty or something else altogether, we all have things that hold us back from fully embracing a life sold out to Christ.

But before we can even make that decision, there’s one last question we need to address: Why believe in Jesus at all? Why become a Christian (and live like one, with all that entails) instead of simply going along, doing life as we please? Being a dedicated Christian is a lot of work, it isn’t always easy and convenient, and it isn’t always fun. So why bother?

The way I see it, there are two reasons: because it’s true and because it will change your life.

I don’t really understand how people can say “It doesn’t matter what religion you believe–as long as you’re a good person.” The Bible is pretty clear–there is only ONE way to get to Heaven, and Jesus is it.

Now, yes, I know what you’re thinking–that sounds incredibly arrogant, self-centered and selfish. But honestly, it’s not. To say that all religions are equal doesn’t even make sense. They disagree on so many different points. Either Jesus is God or he’s not. Either reincarnation is real or it’s not. Either being a good person is enough or it’s not.

They can’t all be true. That’s illogical. Only one can be true. And our job is to figure out which one that is. Which is exactly why we’ve been examining all of the evidence in this series–to determine if Christianity really is true or not. And, based on the evidence, I believe without a doubt that it is.

So, if Christianity is true, it only makes sense that we would live according to it, rather than according to the half-truths and outright lies we find elsewhere.

2. Because it Will Change Your Life

Secondly, Christianity matters because it will completely change your life if you let it. It’s a little hard to explain how, but I’ll try.

It’s kind of like falling in love. Before you get to know the other person, you probably don’t think too much about them. When it comes to spending time with them, you could take it or leave it. If they disappeared off the face of the earth, you wouldn’t be all that upset about it.

Once you really get to know the person and fall in love, however, everything changes. You find yourself looking forward to spending time with them. You think about them and miss them when they aren’t around. Just knowing them and spending time with them impacts your entire life and who you are as a person. Eventually, you can’t imagine life without them and you wouldn’t want to.

Okay, that’s kind of cheesy, but it’s the truth. When you don’t know God that well, you don’t really understand why you should bother. But as you really get to know Him, you realize you wouldn’t want it any other way.

Christians don’t worship God, read the Bible, go to church or do any of those sorts of things because we have to (well, most of the time). We do them because we genuinely want to. Not only because God deserves it and commands it,  but because we have seen how life is so much better when we do.

Of course, it’s important to realize that God is not a genie or a magic 8 ball. You can’t just half-heartedly say “Fine. I’ll read the Bible a little and go to church a couple times–now where’s my blessing??” It’s a relationship. One that will change you from the inside out, but one that will take time to take effect.

And let me tell you, once you have–and I mean REALLY have–there’ll be no turning back.

How is your faith these days — “Gotta have it” or “take it or leave it?” Has examining all of the evidence in this series helped at all?

**For the links to the rest of the posts in this series, check out the intro post, Christianity: Fact or Fiction? Examining the Evidence You Need to Know

**And For a REALLY good book full of additional information, be sure to check out The Case for Christ by Lee Stobel–a MUST read for every Christian, in my opinion!