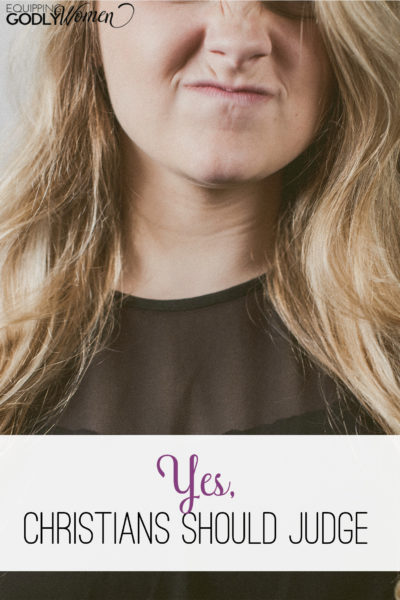 And honestly, the people who say these things are right–at least part of the time. Christians can be hypocritical and judgmental. Not all of us all of the time, and of course no one wants to be hypocritical or judgmental, but we’re all human and we all mess up sometimes. It happens, as unfortunate as it is.

So, when facing people who call us hypocritical or judgmental, we *should* be able to fess up and say “Yep. I can be sometimes, as much as I wish it weren’t true! Thank goodness for a loving and forgiving God that takes me back every time I mess up, because I do frequently!”

But we don’t. Instead, many Christians have gone in the opposite direction. Many Christians, scared of being labeled hypocritical or judgmental, are refusing to take a stand, and have stopped identifying sin as sin at all.

How often have you heard a Christian say “It’s not my job to judge?” This sentiment, which actually comes right out of the Bible, is based, in part, off of Matthew 7:1, which states: “Do not judge so that you will not be judged.” Pretty clear, right? Except, to quote just that passage is to take the verse completely out of context. Consider the rest of the passage:

“Do not judge, or you too will be judged. For in the same way you judge others, you will be judged, and with the measure you use, it will be measured to you.

In this oft-quoted passage, Jesus wasn’t saying “Don’t judge ever.” Instead, he was telling the hypocritical Pharisees, who LOVED to catch others breaking the law: “tend to your own sins first, and then you’ll be in a better condition to address others’ sins.”

In fact, just consider these other verses which make it pretty clear that Christians SHOULD judge:

“Do not judge by appearances, but judge with right judgment.” –John 7:24

“The person with the Spirit makes judgments about all things, but such a person is not subject to merely human judgments” –1 Corinthians 2:15

“Open your mouth, judge righteously, defend the rights of the poor and needy.” –Proverbs 31:9

“Beloved, do not believe every spirit, but test the spirits to see whether they are from God, for many false prophets have gone out into the world.” –1 John 4:1

“If your brother or sister sins, go and point out their fault, just between the two of you. If they listen to you, you have won them over.” –Matthew 18:15 (How could we possibly address someone else’s sin if we weren’t allowed to judge that it was a sin to begin with?)

When you don’t just pick one verse out of the Bible, but you look at the issue in terms of the Bible as a whole, things shift dramatically, don’t they?

I heard a fantastic analogy a few years ago. The preacher of the church we were attending at the time made a very strong (and animated, lol) case that we NEED to tell our friends and family when they are messing up.

It’s like watching someone run straight for a cliff. If you really care about the person, do you just sit back and bite your tongue? Do you say, “Well, I wouldn’t do it, but it’s not my job to judge?” Do you say, “Well, I know it’s wrong for me, but they should be allowed to decide what’s right for them?”

Can you even imagine watching your friend heading into obvious danger and just sitting by, not saying something to warn them? What kind of friend would you be?

When Judging is the Loving Thing to Do

Would you just sit by and watch your friend make a mess of things, saying “It’s not my job to judge” or “I don’t want to interfere?” Or would you stop your friend from making a horrible mistake he/she would regret later? What would be the loving thing to do?

(Or do you not believe the Bible when it says these things are wrong–which is a different matter altogether?)

And this doesn’t just apply to your close friends and family either. Like the Parable of the Good Samaritan shows us–every one is our neighbor. Pointing out sin to those you aren’t close to is certainly more difficult, but if you’re the only person for the job, then you’re the person for the job.

A Life Without Judgment

Many Christians love to say “It’s not my job to judge,” but what would happen if we all followed that sentiment and agreed to stop judging each other once and for all?

Clearly, that wouldn’t work. Christians should judge. For the good of ourselves and others. It’s how we make good decisions, avoid falling into sin and help others avoid sin as well.

**Note: I’m not saying we should think we are better than others or go around screaming others’ sins in their faces (obviously). Just that we need to be brave enough to judge the difference between right and wrong and act accordingly (AND lovingly).

Do you struggle to call sin a sin? Why do you think that is?