What Your Pastor Won’t Tell You About the Reformation 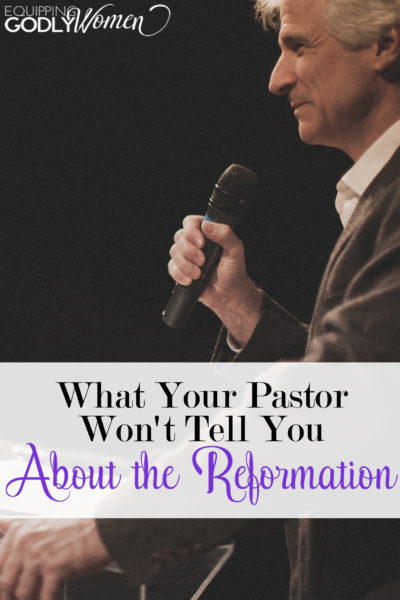 Is it possible to earn college credit for time spent at church? If so, I’m pretty sure I’d have multiple PhDs by now.

Not only did my mom take me to church regularly (I went three times a week nearly every week from elementary school through college and beyond), but my dad made sure we visited a wide variety of churches as well.

In fact, I can easily rattle off nine different churches I’ve regularly attended at some point in my life–not including the countless churches I’ve visited here or there, the classes I took at Bible college or the sermons I’ve listened to online.

So to say I’ve heard a sermon or two in my life would be a bit of an understatement.

But it wasn’t until I grew up and married into a Catholic family that I realized two things:

Typically, Protestant sermons center around a verse or a concept found in the Bible. The pastor will read it, explain it, expound on it, and tell you how you can apply it to your personal life. Which is great! Absolutely love it.

But one thing they never talk about? Church history.

Now, don’t get me wrong. I’m totally NOT a history person. Like, at all. Don’t bother asking me any history questions because I promise I will embarrass myself. And I’ve never had a problem with that.

Until I read this quote by John Henry Cardinal Newman:

“To be deep in history is to cease to be Protestant.”

(For the record, I’m neither Catholic nor Protestant. Simply a Christian committed to examining the facts and uncovering the truth. You can find out more about my journey here.)

It’s almost sad to realize how much of our beliefs as Christians are actually shaped not by the Bible itself, but by the things we’ve been told by our parents, pastors and Christian brothers and sisters who have gone before. Which is a great thing when they’re right, but horribly tragic when they’re mistaken. And you don’t realize just how much these outside forces have shaped your faith until you start researching them.

So today, I’m attempting to set part of the record straight.

Not because I care if you are Protestant or Catholic (I truly don’t and have no desire to convince you or persuade you either way). But because the truth matters. And whatever you believe, I want you to base it on truth, not just biased or incomplete hearsay.

So with that in mind–here are a few things you should know, specifically on the topic of the Reformation.

1. Martin Luther Had No Intentions of Causing a Big Scandal or Divide

While it’s fun to imagine Martin Luther nailing his 95 theses to door of the Wittenberg Castle church in some dramatic and earth shattering protest, the reality of what happened is far less dramatic.

Martin Luther wasn’t trying to start a huge revolt. Instead, he was simply raising a few topics for discussion.

Christian Smith writes in his book, How to Go From Being a Good Evangelical to a Committed Catholic in Ninety-Five Difficult Steps:

…Luther’s 95 theses were hardly a radical protest. In posting them, Luther was not somehow nailing an unusual “This Church is Toast!” message of early Protestant revolt against Rome. He was rather doing what university professors of theology, of which he was one, regularly did in his day…

That this reads more like a departmental email announcement than the bold manifesto of a radical, world-transforming protest is no accident. That’s essentially what it was.”

He wasn’t trying to overhaul people’s beliefs, start a new religion, or condemn the Catholic church. He simply wanted to start a discussion.

**You can read the 95 Theses for yourself here: Martin Luther’s 95 Theses.

**Or find the condensed, easier-to-understand version here: What did Luther actually say in the 95 Theses that sparked the Protestant Reformation?

2. Luther Actually Believed in Catholic Teaching and Wanted to See it Practiced Correctly

Another thing many people don’t realize is that Luther was a German monk and a devout Catholic. He wasn’t trying to change Catholic teaching–he simply wanted to see it taught and practiced correctly. (Which, at that time, it was not in some places.)

Luther was actually FOR the authority of the church, the pope, indulgences, Mary and all manner of other traditionally Catholic beliefs.

The problem (which was a legitimate problem) was simply that some Catholic priests in that time were selling indulgences (reduced time in purgatory) in order to raise the funds to renovate St. Peter’s Basilica in Rome. Which is a big no-no.

Luther was hoping to fix that.

3. The Whole Thing Got Blown Out of Proportion

Instead of starting a small, friendly discussion or improvement committee, Luther’s post went viral, so to speak. Copies were sent to friends and church officials. It was sent to various theologians, and then to Rome. Luther was called before a counsel to defend his beliefs, but no agreement could be reached.

And instead of saying “Okay, well, you believe what you want; we’ll believe what we want” like we do today, Luther’s teachings were examined, pronounced heretical, and he was excommunicated from the church.

Honestly, the whole thing probably could have been avoided if people would have just played nice.

4. Martin Luther is Not a Role Model

Now, don’t get me wrong, there are certainly things Martin Luther did that were commendable. It takes a very brave and deeply devoted man to stand up for what is right in the face of so much pressure. That’s amazing and I doubt I would be that brave personally.

BUT what many people don’t realize is that…

Now, it’s important to note that MANY well-known and much loved Christians throughout history had questionable beliefs. But just thought it was worth mentioning for a more balanced approach. He wasn’t perfect. (No one is.)

5. The Reformation Likely Caused More Problems Than It Fixed

Did the Church need correcting? Oh, absolutely. But was a whole reformation really necessary? I don’t know; I wasn’t there.

But what I DO know is that something that started as a simple request for much-needed discussion and church reform turned into something much bigger than anyone bargained for or anticipated.

Growing up Protestant, the separation between all of the churches never bothered me much. But I’m starting to wonder if it’s a bigger problem than any of us realize. (But maybe that’s because I’m caught in the middle and wish I could combine the best of both worlds. (Is true teaching, good music AND childcare really too much to ask for?)

6. The Catholic Church Has Since Clarified Its Stance

Many people believe that the Catholic Church teaches that you can earn your salvation by good works or that by doing good works, you can become “more saved” than you were before. This simply is NOT true.

The Catholic Church also believes that we are saved through faith, but that it is a living faith which naturally produces good works. (The works are the by-product or fruit, NOT the cause.)

Because this issue was such a huge part of the Reformation, the Catholic Church has since gone out of their way to clarify their position.

**For more on this matter, please see my article Is Faith Alone Enough? where I take a Bible-based stance on the issue.

7. The Reformation is Over. You Can Go Home Now.

According to Christian Smith, author of How to Go From Being a Good Evangelical to a Committed Catholic in Ninety-Five Difficult Steps:

Do not fail to grasp the massive significance of this event. The Protestant doctrine of justification (through faith by grace alone) was the “material principle” of the Reformation… And now these differences have been reconciled…

In short, when it comes to the decisive doctrine of justification today, here is the news: the Reformation is over.

While the church still has many, many, many matters to sort out, the good news is that this one has been. The factors that started the Reformation aren’t really in play anymore. The reformation is over. You can go home now.

For better or for worse, Luther’s actions hundreds of years ago still have a massive impact on the faith of every single one of us today. We owe it to ourselves and to our children to follow to make sure that the effect is a positive truthful one. 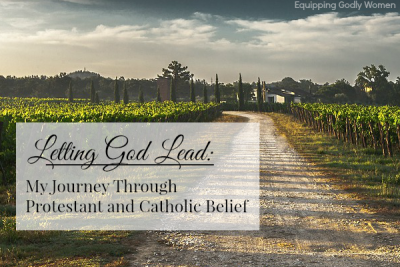 Enjoyed this post? Don’t miss the rest of the series:
Letting God Lead: My Journey Through Catholic and Protestant Belief