Four Things Every Christian Needs to Know About Forgiveness 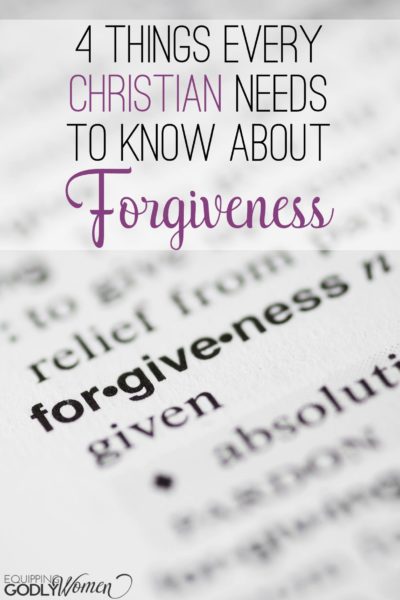 You know how there are some posts that leave you feeling all warm and gooshy inside?

This is not one of those posts.

Are you struggling with unforgiveness? Read on. There are four things you probably don’t want to hear–but that you probably need to.

1. Forgiveness is Not Optional

Have you ever thought or said the phrase “I know I should forgive, but I just can’t…”

Bear with each other and forgive one another if any of you has a grievance against someone. Forgive as the Lord forgave you. –Colossians 3:13

Read Matthew 18:21-35 – the Parable of the Unmerciful Servant – and you’ll get a very clear picture of how God feels about people who have been forgiven big debts (every single one of us, as Christians), who then turn around and refuse to forgive smaller debts.

And not only that, but did you realize that your own forgiveness is on the line when you refuse to forgive others?

Just check out these scary verses:

But if you do not forgive others their sins, your Father will not forgive your sins. – Matthew 6:15

And when you stand praying, if you hold anything against anyone, forgive them, so that your Father in heaven may forgive you your sins. – Mark 11:25

Philippians 4:13 says “I can do all this through him who gives me strength.”

Forgiveness may not be fun or easy, but yes, you absolutely CAN do it, and you must.

Of course, if you’re going to forgive, it’s important that you understand what “forgive” actually means and does not mean.

Instead, forgiveness simply means choosing to relinquish your right for revenge. Instead of “an eye for an eye,” you simply say “it is what it is,” release the anger and frustration, and then move on with your life.

Romans 12:19 says “Do not take revenge, my dear friends, but leave room for God’s wrath, for it is written: “It is mine to avenge; I will repay,” says the Lord.” Deuteronomy 32:35 echoes the same.

Sure, you could get revenge or hold someone’s faults against them… but why not let God deal with it instead? He’s WAY better at vengeance anyways (remember the flood?), and it will leave you with more time for pursuing the fruits of the spirit instead.

**By the way, “Finding Joy Through Forgiveness” — an interview with Jane Jenkins Herlong, author of Rhinestones on My Flip Flops — is a great resource to watch if you’re finding yourself in a situation where you are suffering from long-standing hurt or anger toward someone.

3. Forgiveness is About You and God – Not Them

And while it’s very sweet to think about others, the fact is, whether or not you forgive someone has very little to do with what they did to you (or your loved ones), and everything to do with what God has done for you.

The truth is, ALL of us have committed terrible offenses, both against God and against others. There isn’t a single person in the world who can stand up and say “Hey, not me. I did everything right. I’ve never made a mistake or hurt someone else.”

And yet, despite all of our failures and shortcomings, God forgives us anyways. And He calls us to do the same for others.

Plus, when you forgive others, you prevent Satan from establishing a stronghold in your life.

Second Corinthians 2:10-11 says, “Anyone you forgive, I also forgive. And what I have forgiven—if there was anything to forgive—I have forgiven in the sight of Christ for your sake, in order that Satan might not outwit us. For we are not unaware of his schemes.”

It isn’t just the big sins that Satan uses to tempt us and lead us astray. Even something as small as a little delayed or incomplete forgiveness is all the room Satan needs to inch his way into our lives and start wreaking havoc. Why give him the opportunity?

“For though we live in the world, we do not wage war as the world does. The weapons we fight with are not the weapons of the world. On the contrary, they have divine power to demolish strongholds.” – 2 Corinthians 10:3-4

When I was in high school, there was someone in my life who I had a tough time forgiving. I was very angry with this person and wanted little to nothing to do with them.

Somehow, though, I did find a way to forgive–not because anything changed or because I wanted to, but because it was the right thing to do.

And let me tell you–it made SUCH a difference in my life. So much so that ever since then, I’ve been super quick to forgive anything and everything (probably even quicker than I really should). I do my very best not to hold ANY grudges anymore, because I know what that’s like and it’s awful. I don’t want that in my life anymore.

Sure, there are probably things that I have every right to get mad about, but why? How much of it really matters anyways? And even if it were something big that truly mattered, would getting mad and sulking about it help anything?

The truth is, there is not a single thing you can change about your past. Until the day you create a time machine and go back in the past, everything that has already happened is what it is.

BUT you can change your present and your future. You can choose to make the most of here on out.

But it’s been said that holding a grudge is like holding a hot coal in your hand and waiting for it to burn the other person–and this is so true.

Because let me tell you, a life of peace and contentedness is worth SO much more than a life stuck in the chains of unforgiveness. I promise.

Is there anyone in your life you need to forgive? What’s holding you back?