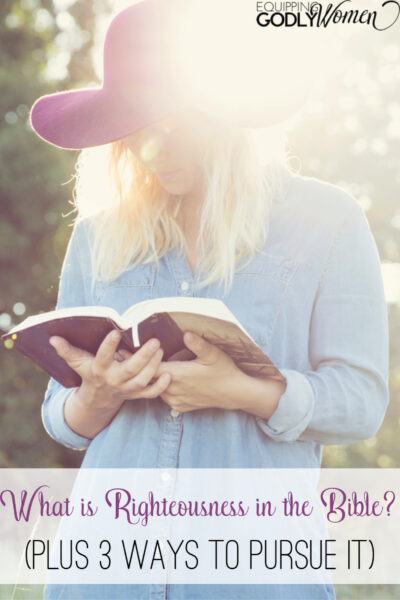 Did you know that Righteousness is mentioned over five hundred times in the Bible?

Righteousness in the Bible can feel abstract and hard to grasp. It’s not as popular as Biblical concepts such as love and hope, so it might be tempting to give it a glance and then move on with a polite nod. But it’s just as important as the words we’re more comfortable with.

There’s a saying I grew up hearing that goes, “If the Bible says it once, pay attention. If it says it more than once, pay even more attention.” With so many Biblical mentions of righteousness, it’s an essential concept to learn more about.

What is the Definition of Righteousness?

You can do a quick Google search or use my personal favorite dictionary tool, Webster’s 1828 Dictionary online, to find more comprehensive definitions, but the concept remains the same.

These definitions help to provide a better grasp of the word itself, but they remain a bit too abstract to be helpful. (At least to me!)

To gain a better understanding of the concept of righteousness, let’s take a quick peek at the Old Testament.

What Is Righteousness in the Old Testament?

Our struggle to understand and attain righteousness began with the first act of rebellion in the Garden of Eden.

Because we are made in the image of God, we have an innate desire for rightness. People want to be right, do right, and be treated right. Unfortunately, sin throws our moral compass off of true north. Sometimes our quest for moral correctness sends us in the complete wrong direction!

Proverbs reiterates this danger, warning that there is a way that seems right to man, but the way thereof is death.

A perfect Biblical illustration of this misperception of righteousness is the story of Cain and Abel. Cain worked hard and gave to God out of the bounty produced by his efforts. It seemed like the right thing to do, but it wasn’t, and the aftermath was catastrophic.

The Old Testament shows us the dangers of depending on our own sense of morality to define righteousness. It also provides a picture of what righteous living looks like.

The Hebrew word for righteousness can also be translated to the English word “justice.”

The Old Testament frequently reiterates God’s desire for His people to defend the poor, needy, foreigner, fatherless, and widowed people among them.

When prophets like Isaiah and Ezekiel call the people of Israel to return to following God, they condemn the nation for exhiling justice and command them to return to executing justice again. The word for justice in these verses is the same word that is more frequently translated as righteousness.

What does the Old Testament teach us about righteousness?

What is Righteousness in the New Testament?

Acts 10:35 tells us that whoever fears God and works righteousness will be accepted by God.

This verse does a pretty good job of spelling out the definition of the Greek word that is translated as “righteousness.” In the New Testament, righteousness carries an indication of being acceptable to God.

The very first time the Bible uses the word “righteousness” is in Genesis 15:6. The verse doesn’t talk about the Ten Commandments or the law. Instead, we learn that Abraham believed the promise God made, and God counted his belief as righteousness.

You see, righteousness doesn’t start with being right or doing right. Winning people over to your point-of-view won’t make you righteous. Neither will going to church or refraining from telling a lie.

Depending on our own abilities and understanding is self-righteousness, and it crumbles to ash when compared to the righteousness of God.

True righteousness begins with believing that God is who He says.

How does believing God lead to being acceptable to Him?

There is only one person who ever earned God’s full stamp of approval. When Jesus began His earthly ministry, the Father spoke from heaven to declare to the world, “This is my Beloved Son, in whom I am well pleased.”

When our trust moves off of ourselves and onto the Christ, we reflect Christ’s righteousness to God. Jesus has always been acceptable to God, and in Him, we also become righteous–acceptable to God.

What does the New Testament teach us about righteousness?

What is the Difference  Between  Truth and  Righteousness?

Righteousness and truth are closely related concepts. They are used side-by-side in sixteen different verses. But they are not the same thing.

Truth means conformity to fact or reality. It has to do with the trustworthiness of information.

Righteousness indicates conformity of the heart to the law of God.

Proverbs 12:17 says that he who speaks truth shows forth (or declares) righteousness. (Different translations use different words, but the Hebrew words behind it are consistent with the concepts of truth and righteousness.)

Speaking the truth (words and ideas that conform to facts or reality) will declare righteousness (that which conforms to the law of God and is therefore acceptable to him), because God created our world (reality) and defined the laws that govern it.

The armor of God includes the breastplate of righteousness and the belt of truth. The breastplate protects the bulk of the body, including the heart.

1 Cor 1:30 says that we are of God because Christ Jesus has been made our righteousness.

Putting on the breastplate of righteousness is a call to put on Christ. To both lose and gain our identity in Him. To become acceptable to God. To come under His protection in this life and the next.

The belt of truth, on the other hand, is said to “gird up the loins.”

Everyone at that time wore robes and tunics. If you’ve ever complained about not being able to do something because of wearing a dress, you should be able to sympathize with the difficulty of such a garment. Girding up one’s loins was a process of gathering the loose fabric and essentially turning it into a pair of shorts by tucking the loose ends into the belt. This would let the person move without tripping.

Truth does the same thing for us. It keeps us focused on reality. It prevents us from getting tripped up in lies.

What is the difference between truth and righteousness?

1. How to Pursue Righteousness By Looking to Jesus

Talk of desiring and seeking rightness tends to make us think of our actions. Are we doing the right thing? Acting out of the right motivation?

Studying righteousness to write this article made one thing in particular stand out to me. Righteousness isn’t about me and what I do. It’s about Christ and what He did.

Remember the basic definition of “righteous”? Righteousness means to have the nature of moral correctness. That’s not something we have.

Philippians 2:5 tells us to, “let this mind be in you which was also in Christ Jesus.” The writer goes on to explain what he means. Even though Jesus was God in human form, He didn’t fight for equality. He was willing to submit.

Jesus provided the example that Adam and Eve corrupted.

What desire tempted mankind to commit the first sin? They wanted to be like God. They weren’t content to take God at His word. They grasped equality with God instead of being willing to rest in His guidance and provision.

If you want to be righteous, look to Jesus.

Righteousness isn’t about keeping a clean house, serving with the right attitude, or not yelling at your kids. Those are important goals, but move them off center stage to make room for true righteousness–Jesus. Obey the well-known refrain of Psalm 46:10, “Be still and know that I am God.”

2. How to Pursue Righteousness by Asking

In the Beatitudes, Jesus blesses those who hunger and thirst after righteousness and promises that they will be filled.

I have asked the Lord for many things that He has not given me. Experiences like this can make it easy to brush off the promise that we will receive just because we ask. But righteousness is a safe petition.

When we ask and do not receive, it is because we asked for the wrong thing or with the wrong motives.

Righteousness is never the wrong thing to ask for. It is asking for Christ Himself. It is to desire His presence, the indwelling of the Holy Spirit.

If you want to be righteous, ask God for His righteousness.

3. How to Pursue Righteousness by Believing What God Says is True

Once we’ve received that righteousness as a gift, what’s the next step? How do we pursue righteous living once we have been given a righteous identity?

If we believe God enough to surrender our lives to Him, shouldn’t we also believe Him enough to conform our actions to His commands?

We believe that God is truth–He and His words conform to fact or reality.

We believe that God is righteous–all His actions and commands conform to the divine law.

The closer we are conformed to His image, the more we will value what He values and obey when He commands.

Righteousness is a huge topic. It’s possible that I got some of it wrong. It’s definite that there is a lot more to be studied and understood about righteousness. After all, God is the embodiment of righteousness, and He is infinite!

What did you learn about righteousness that surprised you? What step towards pursuing righteousness can you apply to your life today?