How to Care for a Friend Who Has Lost a Child 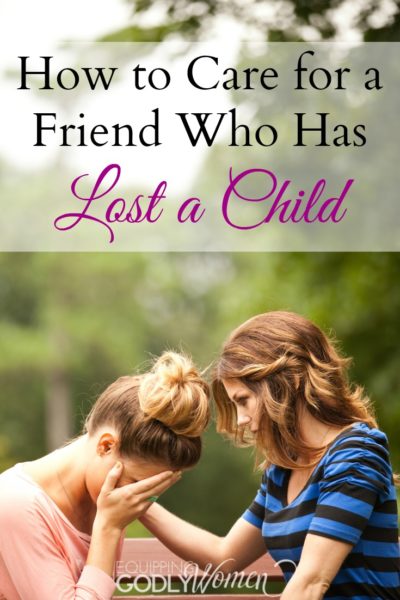 It was 8:00 pm on Valentine’s Day when my husband and I heard a knock that would bring our world crashing down. Before the Marines on our front doorstep had a chance to say a word, I knew.

The words slipped out of my mouth before I could stop them, “He’s dead, isn’t he?”

Their confirmation of my gut reaction was like a physical blow to the stomach. I literally doubled over and went into shock. I went emotionally numb. My mind raced. “I don’t know how to process this.”

My son was a big, bad Marine. He had just returned from a tour in Iraq. We saw him at Christmas. He was home. He was supposed to be safe now. How – Can – This – Be?

My husband, also in shock, was convinced they were playing a cruel trick on us. He called our son’s cell phone, hoping to get an answer, but there was none.

That night after everyone left, we went to bed. There was no sleep. We just held each other and cried until there were no more tears.

Later, the details emerged about what had happened. Our son had been out riding his new motorcycle with his buddies near the military base. While going around a curve, he lost control of his motorcycle and went down. An Avalanche truck was approaching from the other direction and was unable to avoid him. We still don’t know what caused the fall.

The strange thing is, I remembered suddenly feeling an oppressive sadness come over me at the exact time this was taking place. I had known something was wrong. I just never would have guessed it would have been this.

Over the next few weeks and months, we slowly got all of his affairs in order. We got through the funeral. I handled the insurance company and disposing of the damaged motorcycle. My husband closed out bank accounts and prepared his final tax return. The Marine Corps returned his belongings to us and shipped his car.

I remember opening a box that contained his bedding. As I removed his blanket and pillow, I could smell him. I took that blanket and wrapped it around me, laid my head on the pillow and cried. These items had touched my son, and it was the closest I could get to him now.

Only someone who has been there can understand what it is like to walk into the room at the funeral home and see your child in a casket. Or open up a box of belongings to realize that that’s all you have left. Or wonder what your child would be like if he had a chance to grow up. It’s a terrible feeling.

And yet, even if you don’t truly understand what it’s like to lose a child, that doesn’t mean you can’t help someone else who is going through the same situation.

In fact, here are six ways you can do just that.

1. Realize that Everyone Grieves Differently

Just because your friend isn’t grieving the way you would expect doesn’t mean she isn’t hurting or that something is wrong with her. Everyone grieves in their own, unique way and on their own timetable.

Personally, I was working and going to school when this happened, so I was able to keep busy at first and then grieve later. My husband, on the other hand, had just left of job of 18 years and had not yet found another. He was devastated to the point of having panic attacks before wrestling his way back to being able to function. We processed our grief differently. But because we both grieved differently, we were able to take turns caring for each other.

A lot of times people don’t help because they don’t know what to say when someone is going through a tough time. That’s okay. You don’t have to know what to say. Just be there.

At the viewing, those who brought the most comfort were the ones who had also lost a child and understood what we were going through. Words were not always needed; they simply shared in the grief. You can do the same, even if you haven’t lost a child yourself.

Be willing to listen if the person wants to talk about it or just be there for them if they don’t. Don’t try to minimize their feelings, find the silver lining or feel like you have to cheer them up right away. Just listen and care. It’s okay to be sad for a while.

Related Reading: 5 Ways to Help a Friend Going Through a Rough Time

It doesn’t matter how many years have passed; anniversaries, birthdays and holidays are always a reminder that a loved one is gone. There is always a feeling that something is missing or a void where they should be.

Don’t be afraid to mention a loved one who has passed on. You may be afraid of stirring up sad feelings, but those feelings are already there. And it is important to acknowledge them, not pretend like they don’t exist.

It would be meaningful to me to have someone tell me they were thinking about my son and the impact he made on their life. I hate to think that I am the only one who remembers. That he doesn’t matter anymore.

Let your friends know you are thinking of and missing their child too.

4. Care for the Whole Family

It isn’t just the parent/child relationship that suffers when a family loses a child. All of the other relationships are affected as well.

Our pastor told us that many marriages suffer with the loss of a child. I have seen this happen to others I know. We are proof this does not have to happen. We were there for each other. It seemed that when one needed encouragement, the other was strong at that moment. We went back and forth in each role.

Our youngest son paid a price for our loss as well. Not only did he have to process his own grief, but he bore the weight of our fear of something happening to him, too. We knew it was not rational, but sometimes we called him just to hear his voice on the other end. That’s all we needed – reassurance all was well.

When asking how your friend is dealing with her grief, don’t forget to ask how the rest of her family is doing too.

While dealing with the loss of our child, my husband and I had to look at whether or not we truly believed what we have been taught about God and Heaven. Is it REALLY true? Is God still good if He allows the death of my child? If He allowed this, will He allow something to happen to my other children? Can I trust Him?

Your friend may be wondering the same things right now. That’s okay. Don’t make your friend feel bad for asking them or be too quick to gloss over their grief with tired old cliches. Encourage your friend to take their questions, anger and grief to God. God is big enough; He can handle it.

At the time I am writing, it has been seven years. This year, I am struggling with a sense of loss more than I have the past few years, even though the situation isn’t new. Your friend will likely go through the same thing.

Don’t encourage your friends to “get over” their loss too quickly and don’t expect that once they seem to be feeling better that the grief will never resurface. It will. And it will be important to be there for them then just like it is now.

Have you ever lost a child or do you know someone else who has? What advice would you give to someone going through this tough situation?