Did Jesus Really Rise From the Dead? 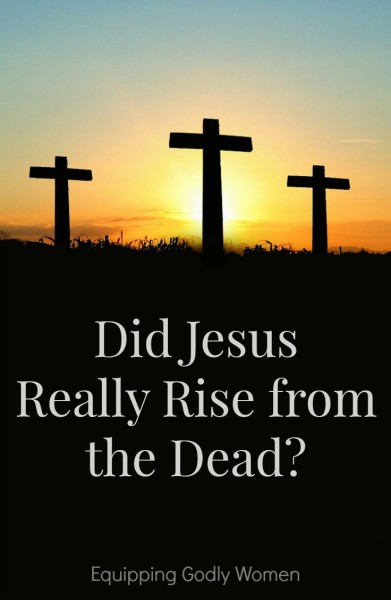 This is post six in a series entitled Christianity: Fact or Fiction? Examining the Evidence you Need to Know. For an overview of the series as well as links to all of the posts as they publish, just click the link! *This post contains affiliate links. Please see my disclosure policy for more information.

Did Jesus really rise from the dead? The story is pretty crazy if you stop to think about it. A man is beaten, crucified and buried. Three days later, he “supposedly” rises from the dead. Sounds an awful lot like a fairy tale to me. Sounds like someone’s imagination ran away from them.

Honestly, I don’t blame non-Christians for thinking the whole thing is a bunch of nonsense. Quite frankly, it doesn’t make sense. But when you look at all the evidence (and yes, there is a ton of real evidence!), it really is the only logical explanation… And that evidence is exactly what we’ll be looking at today.

We’ve already seen that the Bible was written reliably and preserved reliably. This makes the Bible an excellent and trustworthy ancient document from which we can gather a great deal of reliable information. BUT it’s not the only one.

For example, Josephus, a first century Jewish priest and Pharisee, wrote a history of the Jews that mentions Jesus, his death by crucifixion and his resurrection. In 115 A.D., Tacitus, another historian, wrote about Jesus’ death and the response of the Christian community afterward. In 111 A.D., Pliny the Younger wrote about the early spread of Christianity all throughout the region.

These books may not have quite the detail the Bible does (and we wouldn’t expect them to), but simply the fact that Jesus’s crucifixion is mentioned does demonstrate that Jesus most assuredly did die, and his apostles sure believed they saw him alive after the fact.

Okay, so if Jesus didn’t really die and rise from the dead, then what really happened? Unfortunately for skeptics, the alternate theories often fall flat or end up pointing right back to the resurrection!

There are three problems with this theory:

1. The guards knew death. And with their lives on the line if Jesus escaped, it was pretty darn unlikely that they’d make a mistake.

2. Say somehow the Guards did make a mistake, and Jesus wasn’t really dead on the cross, just mostly dead. Even if *somehow* Jesus survived the cross, it is extremely unlikely that he would have survived three days in a tomb without water or medical care.

3. And if somehow Jesus DID survive all of that, he would have still been in awful condition after the beating and attempted crucifixion. There was no way he would have been up walking around making appearances just a couple days later, much less inspiring his followers to change the world because of him.

This seems highly, highly unlikely. Not only did they not have the ability to search the country for a “stunt-double,” but Jesus’ closest friends, family and followers would have been there. Someone would have noticed. Plus, it’s not like Jesus went and turned himself in–they came and got him. How would the real Jesus and the stunt double have known to switch places on that day?

If the women had somehow gone to the wrong tomb, the Jewish leaders would have been more than happy to produce the right tomb with the body still inside. But they didn’t, because they couldn’t.

First of all, why would they? Second of all, when the body did come up missing, historical records show that the Jewish leaders accused Jesus’s followers of stealing it. If they had it all along, they could have simply produced the body and ended any argument about the resurrection. But they didn’t, because they couldn’t. They didn’t have it either.

Jesus’s first followers were Jewish, and Jewish people simply would NOT have done this for a few reasons. 1. They didn’t touch dead bodies; touching a dead body made someone “unclean.” 2. They weren’t expecting Jesus to rise from the dead, so they would have had no reason to fake a resurrection. Furthermore, how would they sneak the body past the guards? Why would the disciples die for something they knew was a lie? How would Jesus make appearances after the fact if he was really dead?

Not only is this highly unlikely, as the guards’ lives were on the line if they messed up, but the entrance to the tomb was covered by a huge rock that was rolled downhill into position. How would the disciples have opened the tomb without waking the guards?

3. Jesus Appeared to Many

In 1 Corinthians 15:3-8, Paul names a whole list of people who saw Jesus after his resurrection: Cephas, the 12 disciples, a crowd of over 500 people, James, all of the apostles, and then Paul. That’s a lot of eyewitnesses! You could probably get a few people to lie about it–but not 500-600 people. And nearly all of these people would have been around to verify what they saw during the time that the Bible was written.

Convincing people who wanted to believe in Jesus’ death and resurrection is one thing; convincing hardened skeptics is quite another. Yet, history shows us that Jesus’ own brother, James, was a firm disbeliever before the Resurrection, and then he went on to die as a martyr for Jesus later.

And you can’t forget about Paul–the most impressive convert of all. Before the Resurrection, he was a Pharisee who actively went around finding and persecuting Christians. Then, after He personally encountered Jesus on the way to Damascus (see Acts 9:1-19), he suddenly turned into one of Christianity’s biggest advocates. He went from persecuting Christians to writing several New Testament books, being persecuted as a Christian himself, and eventually ending up a martyr for the cause of Christ.

Why is it that we still have Jewish people today, but not Amorites or Hittites or any of the other tribes we read about in the Bible? It is because the Jewish culture was INCREDIBLY important to the Jews and they went to great lengths to preserve it. They fully believed (and still do) that their eternal salvation rests on their adherence to the Law of Moses, and so they followed the rules meticulously.

And yet–in the first century, we suddenly see hundreds of Jews abandoning their Jewish practices. No more temple sacrifices. No more circumcisions. No more strict adherence to OT laws. They switched their worship from Saturday to Sunday. Today, people move in and out of various religions without much drama. But for hundreds of first century Jews to abandon their religion, their culture, their families, everything they had ever known–that’s huge. They would have had to have been sure.

6. The Disciples Gave their Lives

According to history, many, many first century Christians (including many of the apostles) died as martyrs for their faith. While people still die today for the things they believe in, with the apostles, it was different. They didn’t die for something they heard and believed in faith. They were eyewitnesses who would have known for sure if the story were true. And people don’t die for made-up stories.

Jesus’s death and resurrection may be difficult to believe, but, when examining the evidence, it really is the most logical conclusion.

Do you believe it is possible that Jesus really rose from the dead? What convinced you OR what is stopping you?