The Bible: Reliable Evidence or Just a Bunch of Stories? 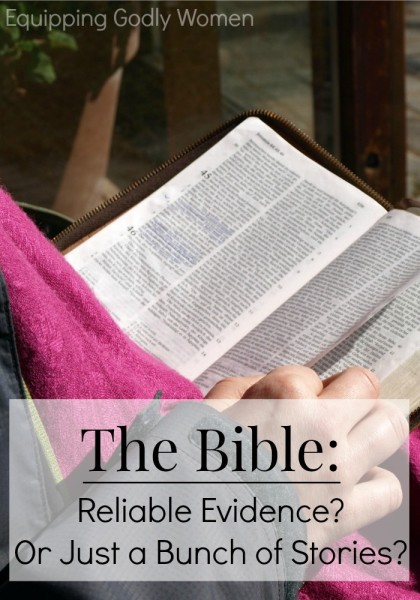 This is post three in a series entitled Christianity: Fact or Fiction? Examining the Evidence you Need to Know. For an overview of the series as well as links to all of the posts as they publish, just click the link! *This post contains affiliate links. Please see my disclosure policy for more information.

Is the Bible true? Well, that’s a loaded question. And the answer you get depends on who you ask.

You see, opinions vary widely. To some, the Bible is 100% truth, every word. For still others, it’s true in theory, but open to a lot of interpretation. Some see it as a definitive rule book or guide. Others see it as little more than a collection of made up stories.

So what’s the truth?

While I do believe that there are some parts that are just moral stories (such as the parables, or wisdom personified in Proverbs), the fact of the matter is, the Bible isn’t just a collection of made-up stories or fairy tales. In addition to being a divinely inspired book, it is also a very important historical document from which we can gather a TON of trustworthy, reliable and even life-changing information.

In this post, we will consider several solid pieces of evidence that let us know with certainty that the Bible writers weren’t making things up–that they were telling the truth to the best of their ability. And for the purposes of this post, we will be speaking of the New Testament only.

So… how do we know the Bible authors didn’t make the whole thing up?

The Bible wasn’t written by a random and unidentified Joe Schmo off the streets who sat down to tell a story one day, like you might find with other religions. Instead, the Bible is the compilation of the writings of several authors who were right at the center of the Christian movement. People who actually walked with Jesus themselves or who were close acquaintances with those who did.

The authorship of these books is pretty widely accepted. Not only do quotes as early as 125 A.D. and church tradition verify the authorship, but no one had reason to lie about it. If someone were going to write a Gospel under a fake name (and others tried), it only makes sense that they would have chosen “stronger” names, since Matthew was a hated tax collector and Mark and Luke weren’t even apostles.

These men knew what they were talking about. They were there.

2. The Bible Was Written Early

If the Gospels had been written centuries after Jesus walked the Earth, the original, true story could have very easily expanded to an exaggerated and over-the-top legend over time. This is not the case, however.

Furthermore, the letters from Paul to the early churches were written even before the gospels, in the late 40s to 50s. That’s only 20 years after Jesus’s death and resurrection. And the creeds Paul mentions in his letters would have been formulated by the early church even before then–as early as the first couple of years after Jesus’ death and resurrection–certainly not enough time for a small group of Jewish people to make up a crazy story and get away with it!

At the time of the Gospel writings, there were still plenty of eyewitnesses around who could verify the events of the Gospels.

In fact, in 1 Corinthians 15:5-8, Paul writes out an entire list of people who saw Jesus resurrected. He even writes the phrase: “most of whom are still living,” which practically BEGS people to go check out the facts themselves. No one would provide a list of references for people to check out themselves if these people did not actually see Jesus resurrected and would not be able and willing to verify the information.

If the writers had made mistakes, someone would have said “That’s not what happened” and the story would have been squashed pretty quickly. Instead, the word was spread all throughout the land.

3. The Degree of Similarity Suggests They Were Telling the Truth

Yet, while many critics would see this as evidence against the Bible, the good news is that these apparent contradictions actually make a strong case FOR the Bible. If all four gospels were exactly the same, Bible scholars would conclude that the authors had conspired together to come up with a cohesive story. Instead, the inconsistencies show that each author wrote his own work independently.

And as for the differences, if you’ve ever heard two people tell the same story, you know that both versions are not going to be the exact same. They just aren’t. Each person tells their story with a different focus. And that’s all that happened here.

4. The Jews Gave Up Their Jewish Practices

For the Jews, the Old Testament laws were their entire way of life. They followed these rules strictly (and many Jews still do today) because they were convinced that their salvation depended on it (and it did). Yet, after Jesus died, hundreds of Jews gave up all or nearly all of their religious rituals. Just like that. This is no small matter.

They stopped giving animal sacrifices, they substituted Jesus’ laws for Moses’ laws and they began worshipping on Sunday instead of Saturday. They began baptizing people in the name of the Father, the Son and the Holy Spirit, which clearly elevates Jesus to the status of God. These changes would have been HUGE for first century Jews.

Imagine what it would take for you to completely abandon your religion, your family and your culture and to embrace something radical, new and different. That’s just a glimpse of what the Jewish people would have done.

Saul, who had dedicated his life to persecuting the early Christians, changed his name to Paul, and dedicated his life to spreading the Good News instead. Jesus’ own brother, James, went from not believing in Jesus to dying a martyr’s death because of his belief. The first century Christians sold the majority of their possessions to live in community. The Bible is full of examples of people who experienced radical life change (and the same thing still happens today).

6. The Early Christians Died for Their Beliefs

Yes, plenty of people die for their religion–it still happens today. The difference here is that–the martyrs and persecuted Christians from the first century SAW the events firsthand. They knew FOR SURE whether they had happened or not. They didn’t die for something they thought was true, they died for something they KNEW was true, because they had seen it.

If it were all just a conspiracy or a lie, why would anyone continue to be a Christian and to be persecuted when they knew it wasn’t true? They wouldn’t.

From the women finding Jesus’ empty tomb (women were second-class citizens in those days) to Peter denying Jesus three times to Joseph of Arimathea (a member of the same council that condemned Jesus to death) giving Jesus a proper burial when his friends and family didn’t–the Bible is full of embarrassing details.

If the early Christians were making things up, they undoubtedly would have made themselves look better. They didn’t. Instead, the best reason why they would have passed on these embarrassing facts is because they are true.

The Bible may be the best source we have in regards to Christianity, but it certainly isn’t the only one. As I mentioned in last week’s post, Jesus: Historical Figure or Modern Fairy Tale? additional sources outside the Bible also verify the most important facts as well. You can click back to read that evidence if you missed it the last time.

Whether you believe the Bible is the divinely inspired word of God or not, there simply is no denying that it is an incredibly valuable historical document as well. And while you could try to find ways to explain away everything it say (and many people do), honestly, the best and simplest solution is simply that it’s true.