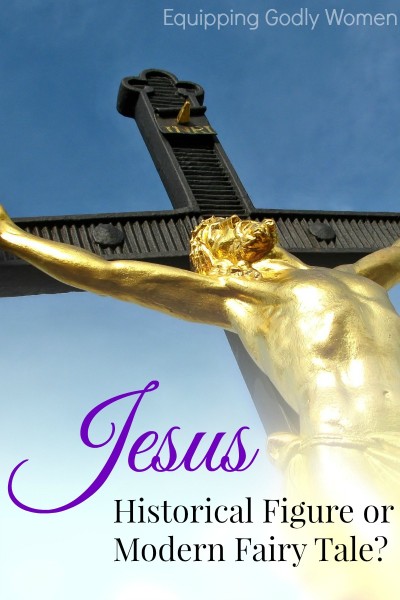 This is post two in a series entitled Christianity: Fact or Fiction? Examining the Evidence you Need to Know. For an overview of the series as well as links to all of the posts as they publish, just click the link! *This post contains affiliate links. Please see my disclosure policy for more information.

It’s a question that most of us take for granted, and yet, honestly, I’m not sure there is a more important question we could ever ask. After all, if Jesus of Nazareth wasn’t a real person, everything we believe is nothing more than a fairy tale, a myth, a waste of time. Yes, Christianity may make you a better person, but if it isn’t true, then what’s the point?

Now, as I mentioned in the series opener, I’ve been a Christian pretty much my entire life. Honestly, I’ve never really questioned whether or not Jesus was real or God exists because I grew up believing it to be true. My parents, pastor and Sunday School teachers all told me that it was true, and honestly, that was all the proof that God exists that I really needed.

Except that now, as an adult, I can see that that’s not very good proof. After all, I could make up all kinds of things. Santa, the tooth fairy, “keep making that silly face and it’ll freeze that way…” It doesn’t mean that they’re true.

Thankfully, in when it comes to Jesus, the stories really are true. Jesus of Nazareth really was a real person, and we’ve got plenty of facts and evidence to show for it. Those facts are what I’ll be sharing today.

*Note: This post is ONLY addressing whether or not Jesus was a real person who lived and breathed–not whether he did miracles, rose from the dead or was God. We’ll address those questions throughout the rest of this series, so be sure to check back!

How to “Prove” a Historical Event

Okay, the first thing you have to realize is that you cannot ever “prove” with 100 percent certainty that anything ever happened in history. This includes not only Jesus’s existence, but also well-accepted past historical events such as the Civil War, the Holocaust or even what you had for lunch last week. If you weren’t there, you can’t know for sure. (And even if you were, you can’t be sure your memories are correct.) There is always a chance, however slight, that any evidence you have was made up or that further, contradictory evidence will be uncovered.

What you CAN do, however, is to look at the evidence you do have and figure out what the best, most logical conclusion would be. And if you have tons of very solid evidence that all points to one conclusion, then you can very safely assume that your conclusion is correct, even if you know that you can’t prove it 100 percent.

According to Bart D. Ehrman, agnostic Bible scholar, historian and author of Did Jesus Exist? The Historical Argument for Jesus of Nazareth, there are three types of evidence that historians look for when learning more about a person or place from the past:

What we DO have, though, is a wealth of the third type of evidence–quotes, references and discussions from and about Jesus, written from shortly after he died all the way up until the present day.

Evidence that Jesus Did Exist

Without a doubt, the biggest source of evidence that we have that Jesus existed is the Bible. And while some may be quick to dismiss the Bible, since it is a religious book with an agenda, the truth is that it is also an important historical document as well. And even if we only look at the Bible through a historical lens, setting aside all religious thinking and persuasion for the time being, it still provides pretty compelling evidence that Jesus existed.

First of all, there is the fact that the Bible is a collection of independent reports written by a number of different people. Back when the Bible was written, people weren’t able to easily share and read each others’ work like we can with the Internet today. The majority of Bible writers wouldn’t have access to the Bible at all, and therefore they wouldn’t have been able to conspire together to write their reports.

Instead, many of the books provide independent witnesses of the events that happened. If one person tells a story, they might be making it up. If several people are telling the same story, the chances that they are making it up are much more slim.

Plus, it wasn’t just the Bible book authors who were writing these things either. Looking at the books of the Bible, many scholars speculate that there might have been earlier written works that some of these books drew some of their material from. If the gospel writers wrote using or referring to a few different sources, that means there were even more sources that we don’t have access to anymore today.

*We’ll get into the issue of whether or not the Bible authors were telling the truth next week. And the week after that, we’ll talk about how we know that the Bible we have today hasn’t been modified from when it was originally written. For now, all that is important to note is that several people were all saying the same thing, independently of each other: Jesus existed.

While the Bible makes a very compelling case that Jesus of Nazareth did exist, it certainly isn’t the only source we have. We can also look at what other Christians were writing around that time to find references to Jesus as well. For example, Papias (a church father who lived in the 2nd century and who knew people who knew the apostles) and Ignatius (the bishop of Antioch, the first city where Jesus’s followers were called “Christians”) both mentioned Jesus in their writings.

Jesus’s followers weren’t the only ones discussing him either. You can also find references to Jesus in four separate sources, all dating back to within 100 years of his death.

Now, none of these sources give us a great deal of information. After all, while Jesus is an extremely important historical figure today, at the time, he would have been little more than a small blip on the radar. (Remember, they couldn’t communicate news and quickly and easily in those days, so word didn’t get out right away.) Yet, just the fact that he is mentioned in several independent sources is pretty strong evidence that he did exist.

Whether or not people believe that Jesus really lived or that Christianity was true, very few would argue that certain historical events, such as the early persecution of Christians, never really happened. Yet, how could they have happened without someone or something to start the movement? People don’t just go around saying their friend rose from the dead for no good reason. They don’t die as martyrs, start riots or launch crusades just because they feel like it. Something must have happened to cause all of the chaos in the first place.

Those who don’t believe in the Biblical Bible that Christians believe in today typically hold one of the following viewpoints:

As we can see from the evidence above, the claim that Jesus never existed is pretty hard to substantiate. No matter what people thought of him, there are tons of references to him, which would indicate that he did, in fact exist.

While Bible scholars may debate who exactly Jesus was, the issue of whether or not he even existed isn’t really up for debate. Virtually all trained Bible scholars will agree: Jesus existed, he was a Jewish man, he was a preacher and teacher, and he was crucified during the reign of Tiberius.

In fact, the idea that Jesus never existed in the first place is the story that’s been made up as of late. Apparently, every single source that mentions Jesus up until the 18th century assumed that he actually existed–even Jewish and pagan sources.

While there is always the chance that the Jews invented Jesus, the conclusion simply doesn’t make sense. Not only was the idea of Jesus and his resurrection terribly offensive to the traditional Jewish beliefs of the time (They were expecting a political leader, not a crucifed savior, and they believed everyone who died on a tree was cursed), but what motivation would they have possibly have had to make the whole thing up?

No, when examining the evidence that we have–and we do have plenty of it–only one logical conclusion remains, and it is the one nearly all trained Bible scholars agree on: Jesus of Nazareth did exist. It’s the most logical explanation.