Was the Bible Reliably Preserved? 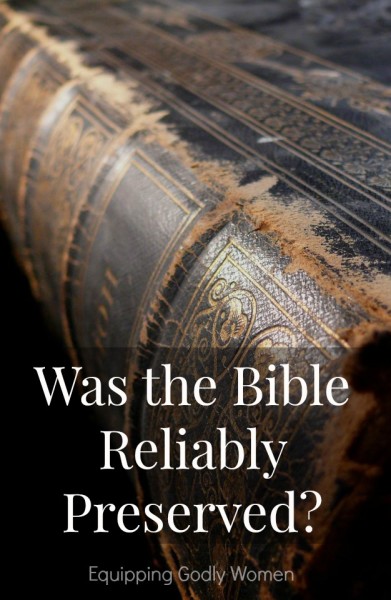 This is post five in a series entitled Christianity: Fact or Fiction? Examining the Evidence you Need to Know. For an overview of the series as well as links to all of the posts as they publish, just click the link! *This post contains affiliate links. Please see my disclosure policy for more information.

If you’ve spent much time talking religion with non-believers, you may have heard statements such as the following:

“The Bible is written by men. Worse yet, it has been translated and rewritten, leaving entire books out in order to meet the specific needs of the men who were writing.”

“Due to my general disdain for man’s feeble attempt to understand the meaning of it all (a.k.a religion) through a book written piece meal thousands of years ago, most of which was passed down orally for generations before it was actually written down (think about the telephone game)…”

While I don’t agree with statements like these, I can completely see where they’re coming from! After all, the Bible IS nearly 2,000 years old now. Isn’t it foolish to base our lives around something that is SO old and that has undoubtedly been modified and changed since then?

Unfortunately, however, they aren’t enough. You see, it doesn’t really matter what the first century Christians wrote in the Bible if the Bible has been dramatically changed and altered since then. So… has it been? That’s the question we’re answering today.

Has the Bible Been Preserved Reliably?

I have some bad news and good news. Let’s start with the bad news.

Okay, now for some good news!

1. The Manuscripts We DO Have Date Back to Within Just a Couple Generations.

While we may not have the very first copies of the documents, the manuscripts we DO have date back to within just a couple generations of the initial writings. (Compare this to other ancient texts, where there is a gap of five to ten CENTURIES between the original writings and the oldest surviving copies–that’s quite a difference!)

Plus, we also have several other sources, such as commentaries, sermons, and letters by early church fathers which also contain Scripture verses. In fact, even if we didn’t have the early manuscripts at all, we could still piece together the entire Old Testament in early form just from the Scripture that is quoted in other early sources!

2. We Have an Astonishingly Large Number of Early Manuscripts.

If we only had two copies of the early manuscripts, knowing which side of each discrepancy contained the error would be difficult. However, there are over 5,600 ancient New Testament Greek manuscripts catalogued today. That’s a lot of manuscripts to compare!

The ancient text with the second highest number of copies still in existence is Homer’s “Iliad,” with fewer than 650 Greek manuscripts. (That’s tiny compared to the Bible’s more than 5,600 copies!) Furthermore, these “Iliad” copies have a 1,000 year gap between the time of the original writing and the oldest surviving copies! Yet, no one questions the authenticity of this writing.

With over 5,600 early manuscripts, it is fairly easy for Bible scholars to see the similarities and differences between all of the manuscripts and determine which version is correct. In other words, if you were playing telephone, and 28 out of the 30 people who finished the game all gave the same answer, it would be pretty easy to tell what the originally message was, even if a couple people messed up the words a little.

In today’s world of the Internet, books and newspapers, I can see how people would compare the early church’s oral culture to a game of Telephone. But what we have to remember is that–the early Christians weren’t used to relying on modern technology! They told Bible stories for entertainment, and they did this all the time. Scripture memorization was essential to their way of life because they couldn’t hear or read it otherwise. They were good at memorization. Plus, many of Jesus’ words were spoken in poetic form, so they would have been easier to memorize.

Furthermore, part of the fun of playing Telephone today is in messing up the message. People purposely talk softly, they don’t repeat what they said, and some people mess up the message on purpose. The early Christians wouldn’t have done this. They would have made sure they got the message right before they passed it along, and they would have constantly checked with each other to make sure they were saying the same, consistent message. This is why the early church started forming hierarchies and holding councils–to make sure that the right message went out.

4. Today’s Bible is Remarkably Similar to the Early Manuscripts

While the early manuscripts do contain 10,00 “errors,” it is important for us to realize how Bible scholars count Biblical errors so we can put the number in perspective. 10,000 errors doesn’t mean the early Bibles are wrong on 10,000 different points. Instead, if 2,000 books have the same word misspelled (think honor vs honour), that counts for 2,000 of those errors. With the number of manuscripts we have available, 10,000 really isn’t that large of a number. (It equals out to less than two errors per Bible, and the Bible is a pretty large book!)

Plus, you have to consider the types of errors. The vast majority of Biblical errors are inconsequential mistakes like spelling variations or a switch in word order that doesn’t affect the meaning of the passage. The errors that Bible scholars have found aren’t huge, glaring errors. As a matter of fact, the Bible is widely accepted to be an incredible 99.5% pure! And furthermore, not a single error in any of the manuscripts puts any church doctrine in jeopardy!

The Bible isn’t just a book that was eventually compiled from various stories that people used to tell centuries before. It was painstakingly and deliberately written and preserved in order to keep a very important (and true) story alive for all people.

And while there is a chance that things have been altered, if you consider the very small gap between when the events happened and when they were written (around 30-65 years for the gospels) and you consider the fact that the Bible we have today still matches the earliest manuscripts, the truthfulness of the books really is the most logical option.

I think this quote by Benjamin Warfield, a former Princeton Theological Seminary professor who obtained four doctorates, pretty much sums it up:

Did you have any idea the Bible was so well-documented and well-preserved? How do these facts affect your opinion of the book as a whole?

How Bible Stories Evolved Over the Centuries

How Do We Know That The Bible Has Not Been Changed?

Are the Biblical Documents Reliable?