How Do We Know the Right Books Made it In the Bible? 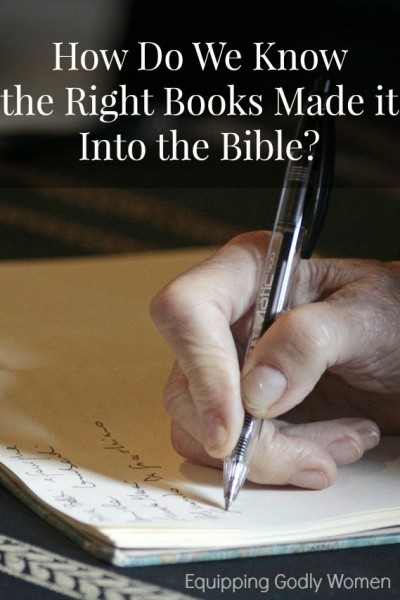 This is post four in a series entitled Christianity: Fact or Fiction? Examining the Evidence you Need to Know. For an overview of the series as well as links to all of the posts as they publish, just click the link! *This post contains affiliate links. Please see my disclosure policy for more information.

In last week’s post, “The Bible: Reliable Evidence or Just a Bunch of Stories?” we looked at the evidence for the fact that the men who wrote the New Testament weren’t lying, writing fiction or making things up–they were doing their best to provide a 100% factual report of the things they had seen and learned while Jesus was alive on this Earth.

Yet, while this information is incredible important, it simply isn’t enough. We also have to answer the question: “Were they telling the whole story?”

You see, it’s no secret that there has been a great deal of drama surrounding whether or not the right books made it into the Bible. With additional gospels having since been uncovered, many of which portray a different picture of Jesus than the gospels of the Bible do, it’s natural to wonder if the picture we have of Jesus is incomplete at best. Perhaps, if we only had all of the facts, we would have a far different picture of Jesus of Nazareth?

So today, we need to answer the very important question: “How do we know the right books made it into the Bible?”

*Again, it is important to mention, that for the purposes of this series we are ONLY talking about the New Testament, not the old. Also, this post contains affiliate links, which means if you make a purchase, I may make a small commission at no additional cost to you.

Why Did the Early Christians Compile the Bible?

And the disciples didn’t write the Bible so they wouldn’t forget. They wrote it to combat the heresies that were circulating at the time and to help the Gospel spread further than it ever had before. You see, the disciples couldn’t always be in every city, teaching and addressing every issue. Instead, they made trips all throughout the land, and then wrote letters to the various churches that they heard were having problems. We still have these letters today (Think Ephesians, Phillipians, etc).

These letters spent time circulating all throughout the area until eventually (in 367), they were listed as an official collection of inspired books, which the Pope and the church finally approved in 382. We still use this exact same list today. (Although modern Protestant Bibles no longer have the 7 Old Testament books known as the Apocryphal or Deuterocanonical books — This post on church history has a section that explains why not.)

Having an approved list of canonical books helped Christians in far away cities better know exactly what was Scriptural and what was not–even when the disciples weren’t around to help them.

How Did the Early Christians Decide Which Books Made it Into the Bible?

Of course, the church didn’t just throw a bunch of books together haphazardly and they didn’t just pick the ones they liked. Instead, with lots of prayer and petition, they evaluated the candidates based on the following criteria:

While there was certainly some variation in which books various churches thought should make the cut, by the year 170 or so, most churches were pretty much in agreement.

It is also important to realize that this was not a “top down” decision, where one council made the decision and everyone accepted it. Rather, independent churches were coming up with these lists of inspired books on their own; the Pope and the council merely ratified what everyone else knew and accepted already.

Books That Didn’t Make the Cut

Reasons vary. For many, it was because they contained crazy or fanciful stories that are obviously not in line with the rest of Scripture. For example: stories that Jesus had an illicit relationship with a young boy, that Jesus denied he was the son of God, that giving to charity harmed people’s spirits, that women had to become men to inherit eternal life… etc.

Furthermore, these Gospels fail to meet many of the criteria for being accepted as accurate and accepted into the canon. They were written well after the fact, they were found in countries far away, they had an obvious agenda, they had inconsistencies and errors that make their authorship highly doubtful, and they don’t fit in well with the rest of Scripture.

Although the original Bible lists did differ slightly, the majority of the early church leaders agreed, and church leaders today still do. Among the educated Bible scholars and theologians of today, there really is very little controversy about whether the right books made it into the New Testament and there never really has been.

If the Church Had an Agenda, This Wasn’t It

Considering that the Bible was written, selected and disseminated by the church, it’s natural to wonder: “Did the church have a hidden agenda? Perhaps the Bible is true, but it isn’t the whole story. Perhaps we only know what the church wanted us to know…”

But to this, I would ask: Then what is the church’s agenda, exactly? What did the early Christians possibly have to gain by making it all up? Being persecuted for a lie? That doesn’t sound like a very good trade. And even today, if the church is really out to “control people” like some would say, are they really going to do that through teaching Christians to be kind, loving and selfless and to give generously to anyone in need? Seems far-fetched to me.

Furthermore, if you spend some time looking through the Bible, you’ll notice something very peculiar–it contains TONS of embarrassing stories. Peter denies Jesus three times. Thomas doubted. Saul persecuted Christians. The churches weren’t getting things right. Even Jesus does TONS of things that are questionable (by worldly standards, I mean).

If the church were making things up–wouldn’t they have made up something that made themselves look a little better? Or that made Jesus more attractive or appealing?

But they didn’t. Because their intention wasn’t to share some stories, advance their own agenda or to deceive people. It was to give an honest report of the events that happened and to equip Christians throughout the area and throughout time. And that’s exactly what the Bible still does today.

Have you ever thought about how the early church decided which books would be included in the Bible? Have you ever doubted their conclusion, or met anyone else who has?