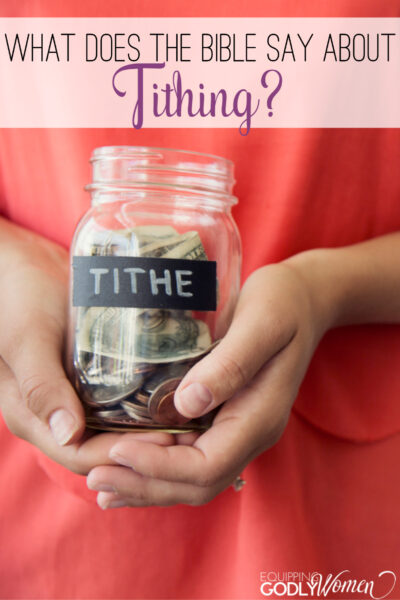 “What does the Bible say about tithing?”

If you’re like most Christians, you’ve probably heard a sermon or two about tithing, but maybe you still have questions. Questions like:

“What is tithing in the Bible?”

“Why should we tithe?”

“How to tithe correctly?”

“Do I have to tithe a certain percentage of my money?”

“Finances are tight. How do I balance my family’s needs with giving to my church?”

These are good questions to ask. There are a wide variety of opinions and perspectives regarding tithing in the Bible.

Because we are called to be good stewards of the resources God gives us, we should ask questions to make sure we are designating those resources well.

Leviticus 27:30-32 contains the first command regarding tithing in the Bible. It states that a tithe, or a tenth, of all the seed of the land, fruit of the trees, and livestock belonged to the Lord.

In other words, the Lord told the people of Israel that one-tenth of their livelihood was His.

Why would the Lord do this? Why would He require His people to sacrifice a piece of their sustenance when He has no need?

A story in Numbers 16-18 sheds more light on why God instituted the tithe.

The children of Israel had just finished challenging the authority of Moses and Aaron, and suffering a plague as a result of their rebellion. After God reaffirmed His selection of Aaron (and Aaron’s sons) for service in tabernacle, He laid some ground rules for how the Levites and the rest of Israel were supposed to interact.

God told the children of Israel that the Levites were a gift to them to do the service of the tabernacle. Because the Israelites could not draw near and offer sacrifices for themselves, the Levites would do it.

Israel’s tithe would sustain the servants of God.

Tithing in the Bible

The concept of a tithe actually exists in the Bible before the Leviticus tithe was instituted.

Though only a few Old Testament Bible verses mention him, Melchizedek is one of the most intriguing characters of the Old Testament. We know that Melchizedek was the King of Salem, a priest of God, and that Abraham met Melchizedek after freeing Lot from an invading army.

During their brief encounter, Abraham honored Melchizedek by giving him a tithe of all the treasures he had recovered when he rescued Lot.

A few generations later, Jacob promises to give a tithe to the Lord after waking from his famous dream of “Jacob’s ladder.”

These pre-law examples of tithing tell us that there is purpose and importance to tithing outside of the Levitical command to tithe in order to provide for the needs of the priests.

If you’re asking yourself, What does the Bible say about tithing? it’s super important to go right to the source and look up Bible verses about tithing.

Mentions of tithing in the Bible are scattered across several books. The topic comes up most frequently in books that outline the establishment of the law and the formation of Israel as a nation. Bible verses about tithing also appear when the nation has fallen away from God and His commands, and are being called to return.

Many of these passages are mentioned or paraphrased throughout this article, but this list will help you find Bible verses about tithing to study yourself.

As you can see, the topic of tithing in the Bible is far-reaching and complex!

Tithing in the New Testament

Did you know that tithing is never directly commanded in the New Testament?

When Christ died on the cross, the veil of the temple was torn in half and the separation between common man and God was abolished. No longer were the Levitical priests needed to offer sacrifices on an altar that others could not approach.

With the Old Testament system fulfilled by Christ’s sacrifice, the tribes of Israel could draw near to God and the Levites were free to own property. Though Israel did not eagerly adopt this new freedom, God’s command to adhere to a system that necessitated a tithe was removed.

What does that mean for us? Is tithing in the New Testament times an outdated construct?

As with most Old Testament systems, the tithe created a picture and pattern that remains relevant to us today.

In Matthew 23:23, Jesus criticizes the Pharisees for paying tithes and failing to exercise judgement, mercy, and faith. He admonishes them to be diligent in the ignored areas without leaving the tithe undone.

This verse and its companion, Luke 11:42, are the closest the New Testament comes to requiring a tithe. Since Christ had not yet died, it could be argued that the tithe of the Old Testament was still relevant at the time, but I think these passages make it clear that Jesus doesn’t give us a free pass when it comes to financial giving.

While a strict ten percent tithe to the church might not be a New Testament mandate, the call to give generously and cheerfully permeates the New Testament.

In 1 Corinthians 9, Paul refers back to the law to support his argument that he and Barnabus have a right to be financially cared for as they “sow spiritual things,” but adds that he has refrained from requesting compensation to avoid distraction from the gospel message he shares.

In 2 Corinthians 9:6-8, he returns to the topic by encouraging the Corinthian Christians to give generously, cheerfully, and without compulsion.

Even people who do not have a religious affiliation know the term “it is more blessed to give than to receive,” which originates from Acts 20:35.

How to Tithe Correctly as Christians

One of the beautiful things about our faith is the freedom within boundaries that God provides us. There is no question that we are called to give generously, but that might look different for you than it does for me.

Though there is no exact formula for how to tithe correctly as New Testament believers, there are some patterns and commands that can guide our decisions:

What Biblical principles guide your giving decisions? What aspects of tithing in the Bible do you find challenging or encouraging? Do you use a tithe as a guideline for giving or vary the amount that you give?