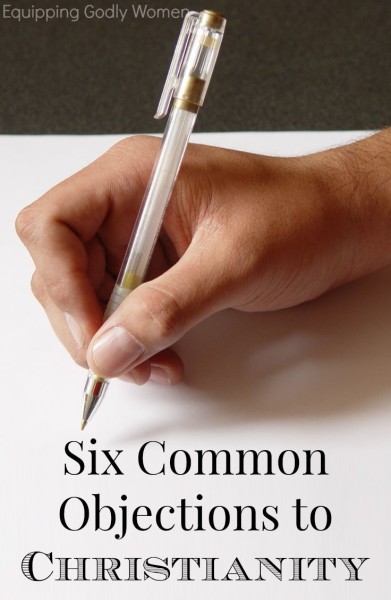 This is post eight in a series entitled Christianity: Fact or Fiction? Examining the Evidence you Need to Know. For an overview of the series as well as links to all of the posts as they publish, just click the link! *This post contains affiliate links. Please see my disclosure policy for more information.

Throughout this series, we’ve examined a great deal of evidence for Christianity. From questions such as Did Jesus Really Exist? to Is the Bible Reliable? to Did Jesus Really Rise from the Dead?, we’ve covered a lot of ground. Hopefully this series has strengthened your faith and equipped you with the tools and knowledge that you need to go out and confidently share the life-changing information we know to be true with a lost and hurting world that desperately needs to hear it.

Because, while we often take these truths for granted, there are millions of people out there who don’t believe them at all. Who laugh at the very idea of Christianity, and who will laugh at you for putting your faith in something so ridiculous.

And when this happens–will you know what to say? 1 Peter 3:15 tells us to “Always be prepared to give an answer to everyone who asks you to give the reason for the hope that you have.” Hopefully this series, and this post in particular, will equip you to do just that.

1. Jesus may have been a good teacher or even a prophet, but he certainly wasn’t God.

Counter-argument: How do you know? To know for sure, you’d either have to be God yourself, or you would have to look at the evidence to see which side of the argument made the most sense. Unlike other people who have claimed to be God, Jesus fits the exact description laid out in the Old Testament–fulfilling prophesies he never could have arranged to fulfill on his own. And then there’s the matter of the miracles, particularly of raising from the dead, that aren’t really easy to explain away. Honestly, it is much more logical to claim that Jesus really was God than to claim that he was a regular man who did these things by his own power.

2. How could a loving God send people to Hell?

Counter-argument: The truth is, God doesn’t want to send anyone to Hell. He’d much rather people come to Heaven with Him, so much so that He sent His one and only son to take our punishment so that we wouldn’t have to. (As a parent–can you even imagine??) BUT God didn’t create a bunch of robots; He created humans with free will. We have the choice whether we want to accept God and be with Him, or reject Him and spend eternity away from Him. That’s OUR choice.

For more on this topic, please read: Why Does God Allow Suffering?

3. Christians are just a bunch of hypocrites; why would I want to be one too?

Counter-argument: Yep, many are. But many non-Christians are too, so it’s kind of inescapable either way. But really, there’s a huge difference between what Christianity teaches and what imperfect humans do with it. We’re humans, we’re never going to be perfect. But God is. So follow Him, not us.

Otherwise, that’s like claiming a medicine doesn’t work because your friend didn’t take it and he didn’t get better. That would be your friend’s fault–not the medicine’s.

4. Christians are narrow-minded/arrogant to think that their way is the only way.

Counter-argument: Actually, it’s illogical to say that all paths lead to Heaven or that it doesn’t matter which path you choose. The major religions/belief systems all contradict at some point. They can’t ALL be true; only one can. Either you reincarnate or you don’t. Either faith is enough or it’s not. Any other explanation simply doesn’t hold up.

Now, yes, there is some room for judgement calls when it comes to specific teachings of the Church–different Christians understand various Scriptures to mean different things–but when it comes to getting into Heaven, there can only be one way.

For more on this topic, see: Is Faith Alone Enough?

5. How can the Bible be trusted when man has manipulated it so much over the centuries to change the message?

Counter-argument: This simply is not true. While some men did try to manipulate the Bible (like Martin Luther removing the Deuterocanonical books, which were previously included), no one ever really succeeded. We know this because we still have several VERY early copies of the Bible as well as other books that quote the original copies, so we can easily go in to fact check and see what is the same and what has been changed–and nothing of any consequence has been changed. The manuscripts we have today are remarkably similar to the earliest manuscripts.

And secondly, while the Bible does contain a few apparent contradictions, that simply goes to show that the writers didn’t conspire together to tell their stories. If the accounts were too similar, that would be even more suspicious. And really, none of the contradictions make even a bit of difference theologically.

For more information, be sure to see: The Bible: Reliable Evidence or Just a Bunch of Stories? Was the Bible Reliably Preserved? and How Do We Know the Right Books Made it into the Bible? (As you might have guessed, I like this topic a lot! lol)

6. Why bother being a Christian at all? Aren’t I fine on my own?

Falling in love with Jesus is kind of like falling in love with your spouse. Before you met them, you probably thought you were just fine. Then, once you got to know them and realized how much better your life was with them, you couldn’t imagine your life any other way. Until you experience the fullness of life that God offers, it’s difficult to really understand. But once you do–watch out! It will change you in amazing ways you can’t even imagine.

Now, do I expect non-Christians to hear these arguments and immediately convert? Of course not. Belief may be grounded in truth, but a good dose of faith is needed as well (We’ll discuss that next week). Instead, my hope is simply to overcome objections so that those who want to believe can if they choose to.

Do you have non-Christian friends? What reasons do they give why they don’t believe? Have you talked to them about it?

Ten Objections to Christianity and How to Respond

Ten Most Common Objections to Christianity