What Abigail in the Bible Can Teach Us About Strength 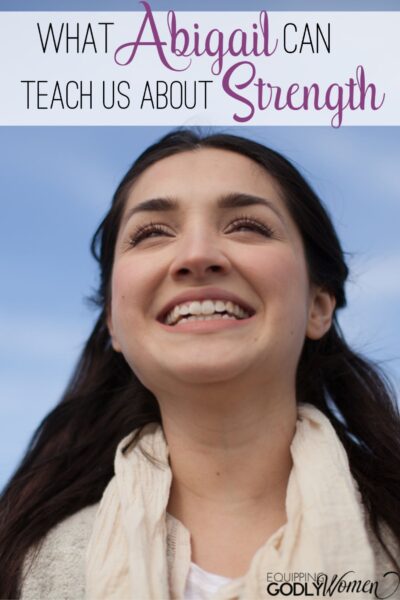 Have you ever looked at your life during a period of hardship and wonder how in the world things ended up that way?

Maybe it wasn’t your fault. You were faithful and checked all of the items on your to-do list. And yet, there you stood, your hopes dashed, with little hope and no exit strategy.

That’s the story of being human sometimes, and that’s what makes great women of the Bible’s stories so relevant. They’re real. They’re painful. They’re unabashedly ugly, without sugar coating.

Who Was Abigail in the Bible?

Abigail’s story in 1 Samuel 25 is one of them. As a young married woman, Abigail in the Bible was not living her happily ever after. Instead, she found herself in a seemingly impossible, terrifying situation.

And yet somehow, she was able to look at a story much larger than hers and find strength in the storm. She made a gutsy move. God honored her courage, and she played a pivotal role in his larger narrative.

If you’ve ever felt hopeless or like the odds were impossibly against you, this story in 1 Samuel 25 is a reminder of how to take courage even in the messiest situations. For just as God had a place in his story for Abigail in the Bible, he has one for you, too.

We are studying great women of the Bible including Hannah and Ruth, so you’ll definitely want to check them out!

3 Lessons We Can Learn from Abigail in the Bible

1. Remember That God Sees Your Pain

Think your life is a mess? Take a look at Abigail’s disaster.

Abigail in the Bible was a woman in ancient Israel who married a very wealthy man named Nabal. She probably had every creature comfort anyone could ask for. This was certainly something to appreciate during a time when Israel had been recovering from repeated attacks from surrounding nations like the Philistines.

The problem was: Nabal was a real jerk. His name literally meant “fool,” and he is also described as “wicked,” “surly” and “mean.” We can speculate how awful he was to his wife based on the way she talked about him. It wasn’t with much fondness—see v. 25!

Being in a loveless, possibly abusive marriage is devastating, especially when your situation looks good on the outside. Abigail’s marriage was probably arranged, as that was the cultural norm of her day, but that doesn’t mean she didn’t have dreams of something better for herself.

Related: How Do I Show Respect When My Husband Is a Jerk?

As if the hopeless marriage situation wasn’t bad enough, the situation got even messier…

You can read the full story in the Bible, but Abigail’s foolish, mean husband insulted Israel’s anointed king-to-be, David. In what wasn’t one of his most flattering moments, David was enraged and threatened to attack the entire estate when he received Nabal’s message.

In an instant, everyone’s lives and livelihood on the wealthy estate was in danger, including Abigail’s. And it was through no fault of their own.

Fortunately, the story didn’t end there. God saw Abigail’s pain and had a plan to work through her messy situation, as we’ll see below.

If your life feels like a hopeless mess, remember that God sees you, too. (See Psalm 10 as inspiration.)

2. Sometimes You Just Have to Take Action

Somebody had to do something, fast, if the people of Nabal’s household were going to survive.

Tellingly, a panicked servant went straight to Abigail, who was described as “an intelligent and beautiful woman.” She acted quickly and ordered that extravagant gifts be presented before David and about 400 of his men. Abigail in the Bible put her life at risk and threw herself prostrate before him, reminding David of his role as the anointed king and asking for mercy.

It worked. He recognized his pride and relented, thanking her for keeping him from bloodshed and vengeance.

Meanwhile, Nabal knew nothing of this. He was getting drunk while hoarding all of his resources. When Abigail told him what had happened the next day, he appeared to have a heart attack and died soon thereafter.

Okay, I have so many questions about this story. Abigail essentially threw her husband under the proverbial bus, going behind his back and over his head. Her actions shocked him so much that he died. Not exactly the model of “submission” here.

What are we to make of this? Was she wrong? Was she right? How much should we imitate her?

We can debate about biblical wifehood all the livelong day, but neither the author nor God makes a comment about whether Abigail in the Bible was 100% in the right by her methods.

What we can see, however, is that she didn’t hide her head in the sand when someone needed to act. She took action—an action that took a lot of guts. Perhaps it was on faith, that if she did something to stand up for what was right, God would do his part.

I am blown away by this kind of courage. It is so easy to get paralyzed by following all the rules that you can miss the greater calling. David saw that God was working through Abigail in the Bible because she chose to stand up.

There may be times in your own trials when it’s best to wait.

But then there are opportunities when it’s clear that something has to happen—particularly when people are in danger. Whatever your storm is like, I encourage you to be bold when it’s clear to act, even when you’re not sure exactly what you should do.

Do something, and watch God do his part.

But perhaps the more astounding outcome is the role Abigail had on David’s life. As Israel’s anointed king (and predecessor to the Messiah), he played a pivotal role in the biblical narrative. What if he had given in to his rage? Would he have made restitution and turned his back toward God? Or would God have eventually replaced him with someone else, just as he had done with Saul?

It’s speculative, of course. But the story of Abigail is in the Bible for a reason. Perhaps it’s because God wants us to see how her story was an important part of his.

It’s worth noting that even after she married David, Abigail in the Bible still didn’t live a personal happily ever after. At one point she was kidnapped along with the rest of David’s men’s families.

She did eventually bear him a son, but he was not chosen as the heir to the throne. What’s more, she was just one of several wives, which I’m sure doesn’t lead to the happiest of marriages.

Perhaps she watched with sorrow as one of David’s sons tried to usurp the throne and the royal family tore itself apart.

The Bible isn’t a collection of fairy tales when it comes to individual stories. But it does have a “happily ever after” in the larger story—God’s grand plan to rescue his entire creation through his messy, sinful people, who are only made faultless through Christ. It is in THIS story that we can put our trust.

I like to think that, to the best of her knowledge during her time, Abigail knew this: “For our light and momentary troubles are achieving for us an eternal glory that far outweighs them all” (1 Corinthians 4:17). And that is how Christians today can find strength too, no matter what they’re going through.

What do you think about the story of Abigail in the Bible and the role she played in God’s plan? What can you learn from her in your own situation?