What Rahab in the Bible Can Teach Us About Empathy 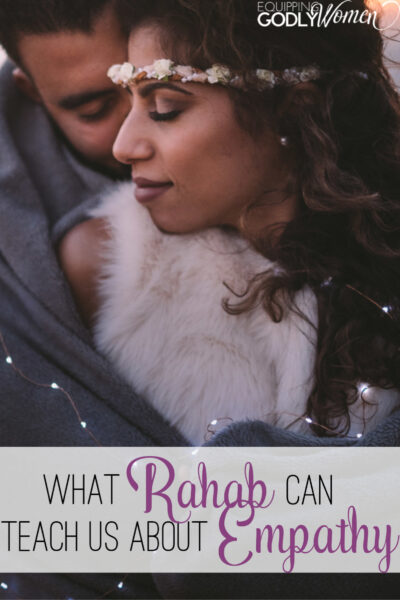 I’ve always loved stories that coax the reader to see the people around them with more empathy.

As a lifelong bookworm, stories shaped many of my childhood aspirations. I wanted to befriend Wanda from The Hundred Dresses and behave like a princess like Sara Crew in A Little Princess.

Stories in the Bible often have the same impact as the fictional stories of my childhood. A glimpse of a life lived thousands of years ago can challenge me to change my perspective and attitude about the people around me.

Rahab in the Bible is one such story.

Rahab occupies an interesting place in the mind and heart of the modern church. Her documented profession as a prostitute keeps her from being a Sunday School staple like Jonah and the Whale or David and Goliath, but her story draws people back over and over again.

You can find the story of Rahab in the Bible in Joshua chapters two and six. She also has a place in the genealogy of Jesus (Matthew 1:5) and the Hall of Faith (Hebrews 11:31).

Rahab in the Bible is best known for three things

So, who was Rahab in the Bible?

There are so many things we can learn from the Bible’s account of Rahab.

We are studying great women of the Bible including Miriam and Leah, so you’ll definitely want to check them out!

3 Things Rahab in the Bible Can Teach Us About Empathy

1. Rahab Teaches Us to Have Empathy for People with Messy Lives

When Rahab’s story in the Bible begins, it says that two Hebrew spies spent the night in the home of a harlot named Rahab. It doesn’t say “a former harlot” or “a woman named Rahab who used to be a harlot.” Yet it’s clear that God was at work in Rahab’s heart before the spies showed up on her doorstep.

The people of Jericho had been hearing stories about God’s people since the Hebrews were delivered from slavery in Egypt. They were terrified! But Rahab was different.

She had heard the same stories, and she was probably afraid just like everyone else, but instead of huddling in fear, Rahab opened her doors to the enemy and protected the invaders from her own people.

Rahab knew who God was.

In the years before Israel conquered Jericho, Rahab was listening to the stories and learning about their God. She recognized that he was the one, true God.

God often opens the eyes of people we would consider to be unlikely candidates. He anoints the youngest brother to be king, calls a tax collector to be his disciple, and chastises the religious leaders to save the life of an adulteress.

Have empathy for the Rahabs of Jericho in your life. Don’t assume God isn’t working in someone’s life just because the sin hasn’t stopped yet.

Before Rahab’s life changed, she had to learn who God was. And while the rest of Jericho waited in fear, Rahab took her first step of faith.

2. Rahab Teaches Us to Have Empathy for People with Difficult Pasts

Have you ever stopped to wonder what life must have been like for Rahab after Jericho fell?

Her neighbors were dead. Her livelihood, dubious as it was, had disappeared. Rahab emerged from the wreckage of her city with her life, her family, and a fledgling faith, but she had to start from scratch.

What was it like to be part of the only surviving family of Jericho living among the conquering Israelites? If Moses, the respected leader of the nation, was criticized for having a foreign wife, there must have been some disapproving murmurs when Rahab and Salmon married.

It makes me so sad when I hear stories about people who attend a church for months without anyone learning their names. It’s even worse when someone is intentionally ostracized because people are skeptical of their history or the genuineness of their faith.

Do you welcome the Rahabs of Israel into the family of God? Do you join in on whispers about the past, or do you live in the present?

We’re called to be wise as serpents and harmless as doves. By all means, be discerning about the company you keep and the people you trust.

Paul warns to “lay hands suddenly on no man.” But don’t be so cautious that you forget to be empathetic and cause harm to people who need to experience love from the body of Christ.

We can’t pretend the past didn’t happen. There are often lessons to be learned and wounds to be healed.

The Bible consistently references Rahab’s past by calling her “Rahab the Harlot,” but it does not do so in a spirit of condemnation. Instead, Rahab’s story highlights the power of faith and the deep inclusion of God’s redemption.

If God didn’t see Rahab’s history as cause to exclude her from the Chosen People living in the Promised Land, who are we to exclude modern Rahab’s from the church?

3. Rahab Teaches Us the Importance of Teaching Our Children to be Empathetic

It might seem strange for me to say that my favorite part of Rahab’s story takes place in the book of Ruth. If you can’t remember Rahab being mentioned in Ruth, you’d be right. However, Boaz is a prominent figure in the book and Rahab was Boaz’s mother! (See Matthew 1:5)

When Ruth and Naomi show up in Israel, widowed and penniless, Boaz sees Ruth working in the field and tells her not to glean anywhere else. He tells his workers to leave extra grain behind for her.

When her nearest kinsman refuses to redeem Mahlon’s line through Ruth, Boaz does not hesitate to take the Moabite woman as his wife.

Boaz’s history through his mother Rahab prepared him to protect and love Ruth.

Are you teaching your children to protect the weak and befriend the newcomers? Do you keep quiet about your past and brush aside challenging encounters, or have you prayerfully considered how they might provide valuable examples to your children of the importance of empathy?

Based on the facts of Rahab in the Bible, it’s clear she had a hard life, and that God used her to weave a beautiful story of faith, redemption, and empathy.

Don’t give up on your acquaintances, friends, and relatives who seem to have messy lives. You never know what God is doing in their hearts.

When people take that first step of faith, don’t make their pasts into a stumbling block. Instead, look back and celebrate God’s mercy and redemption.

How do you show empathy to the people in your life? How do you encourage your children to be empathetic?