What Miriam in the Bible Can Teach Us About Positivity 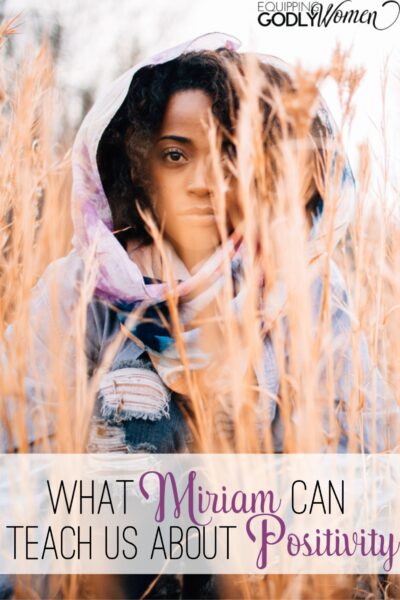 A few weeks ago I was talking with my friend, Joanna, sharing about some of my recent struggles, especially with my attitude.

“I’ve always known you to be a positive person,” Joanna told me.

I chuckled, “That’s because most of the time we spent together was before John and I adopted seven more kids!”

When Joanna and I met, I only had three children. In that season of life, I was busy with raising kids, volunteering at a crisis pregnancy center, and writing. I was busy, yes, but when John and I started adopted kids from hard places we transitioned from “busy” into survival mode.

Overwhelmed with the added chaos and mess (not to mention kids’ outbursts and anger), I found myself complaining a lot. So much so that I knew things needed to change.

That’s when my family and I took drastic measures and attempted to go a year without grumbling—and I wrote about our year in a book, The Grumble Free Year.

It wasn’t an easy year, and our attitude-adjusting journey has made me sympathetic to women in the Bible who’ve faced challenging circumstances and didn’t handle it well. Women like Miriam in the Bible.

Who was Miriam in the Bible?

Miriam in the Bible may best be known as the big sister who helped save her baby brother from certain death. Daughter to Amram and Jochebe, and sister to Moses and Aaron, we first meet Miriam as a young girl who watches her baby brother being placed in the Nile in an effort to save his life (Exodus 2:4).

The next time we see Miriam in the Bible, she is a leader along with her brothers, taking the Israelites across the Red Sea into freedom. Exodus 15:20 says, “Then Miriam the prophet, Aaron’s sister, took a tambourine and led all the women as they played their tambourines and danced” (NLT).

She led the now-freed nation to sing before the Lord, exclaiming his triumph over the Egyptian horses and riders hurled into the sea.

We know nothing of her life between Miriam the child and Miriam the prophetess in the Bible, but while Moses was a desert shepherd, she lived with her people in Egypt. And to be labeled a prophet, God must have used her greatly there.

If I were to guess, those around Miriam no doubt witness her strength and godliness during their captivity. And in their moment of freedom, Miriam might have believed that hardest portion of her life was behind her.

Yet, as I’ve also discovered, while it’s easy to trust God for big miracles, harder is walking through the daily grind of life.

I tell my kids often that we are prone to complain when have unrealistic expectations and are hungry or tired. And even though the Israelites were now free from Egyptian rule, they still had a desert before them.

In the book of Numbers, we see the Israelites complaining a lot. They complained about the hardships, and they longed for the food from Egypt.

Miriam, still a leader, complained too. She and Aaron criticized Moses because he’d married a Cushite woman. Miriam also felt overlooked and unappreciated.

Along with Aaron, she complained, “Has the Lord spoken only through Moses? Hasn’t he spoken through us too?” (Numbers 12:2).

In the verses to follow, God put brother and sister in their place. God clarified his special relationship with Moses (baby brother), and after God’s presence departed, Miriam looked down to see her skin as white as snow from leprosy. This is a long way to fall from the revered prophet who’d led the people in worship at the sea’s shore.

Thankfully, God’s punishment lasted for only seven days, but I imagine Miriam had a better understanding of God—and her position as a servant-leader—after that.

We are studying great women of the Bible including Leah and Mary Magdalene, so you’ll definitely want to check them out!

4 Things We Can Learn from Miriam in the Bible

1. God Can Use Us in the Midst of Hardship

As a child, Miriam in the Bible was a key factor in Moses’ rescue. Her quick thinking allowed Moses to be raised within their family home by offering their mother as the baby’s nursemaid.

Later, after she saw God triumph over the Egyptians, Miriam led the people in worship. Her praise exalted God and put to words the gratitude of the people.

If it hadn’t been for these impossible odds, the Israelites wouldn’t have understood the power of their God. And Miriam’s song still
reverberates through history.

2. Just As Our Praise Elevates Our Spirit, Our Pride Can Bring Us Down

Miriam in the Bible got into trouble when she stopped pointing out all the good God had done and instead pointed toward the (perceived) faults of others. As an older sister, Miriam wasn’t happy in her brother’s choice of wife. And she didn’t appreciate how baby brother Moses was getting all of the attention.

Comparing ourselves to others and wanting more of the glory never leads to anything good.

See Also: Constantly Comparing Yourself to Others? Here’s How to Stop

3. Our Complaining Hurts People, Especially Us

I’d like to hope that Moses’ and Miriam’s relationship was mended after that, but the Bible doesn’t say. We do know that Miriam had to live
outside the camp with a dreadful disease for seven days. She also had to live the rest of her days knowing how much she’d displeased God with her complaints.

Miriam’s attempt to put Moses in his place brought on God’s punishment externally, but we mustn’t ignore what it had already done to her internally. It’s not fun trudging around with a grumbling heart.

And it wasn’t just Miriam with the problem. God’s Word says, “All the Israelites grumbled against Moses and Aaron, and the whole assembly said to them, “If only we had died in Egypt! Or in this wilderness!” (Numbers 14:2, NIV).

As hard as the desert was, the complaining brought everyone down. Numbers 14:29-30 says, “In this wilderness your bodies will fall—every one of you twenty years old or more who was counted in the census and who has grumbled against me. Not one of you will enter the land I swore with uplifted hand to make your home, except Caleb son of Jephunneh and Joshua son of Nun” (NIV).

Is Constant Grumbling a Problem in Your House?

By the way, if you need help curbing the constant grumbling in your house, you’ll absolutely want to check out Tricia’s latest book, “The Grumble Free Year: Twelve Months, Eleven Family Members, and One Impossible Goal,” that just came out this week!

In this fun, lighthearted and very real book, Tricia invites readers into her family’s journey as they commit to one grumble free year — which isn’t easy to do with a family as big as hers!

She shares their plans, successes, failures, and all the lessons they learned along the way — all to help you create a more grumble-free home of your own.

You can find “The Grumble Free Year” on Amazon here.

4. Having a Positive Attitude Comes When We Look to God

When we look at the life of Miriam in the Bible, we can see a clear difference between when she focused on God and when she fixed her mind on her circumstances. The prophet who praised became the leper sent away from camp due to her comparisons and complaints.

Thankfully, Miriam wasn’t completely written off in history. Micah 6:4 says, “For I brought you out of Egypt and redeemed you from slavery. I sent Moses, Aaron, and Miriam to help you” (NLT).

By the end of her life, Miriam no doubt understood a few things better, mostly about her place as God’s servant and how her words (whether praise or grumbles) impact herself and others.

It’s a lesson I’m learning, too. No matter how overwhelmed I am with the chaos and messes, the busyness and kids, I can either grumble about it or I can lift my face to heaven and remember all that God has done for me.

When I choose gratitude and praise, it’s a wonderful example to others.

I know what Miriam would tell me to do. 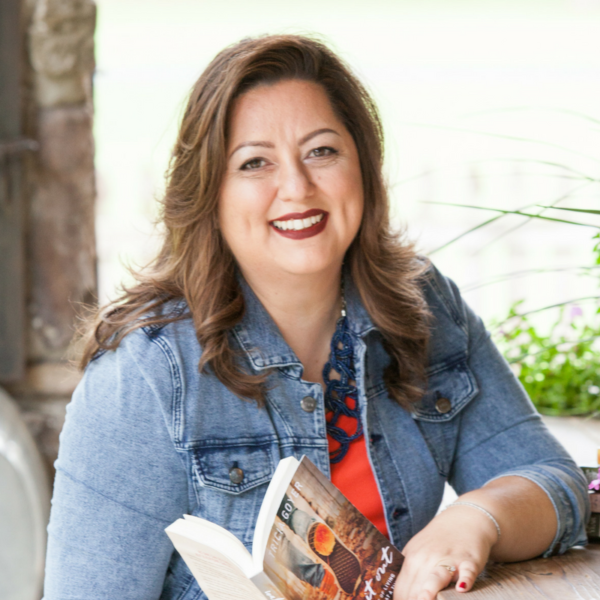 Tricia Goyer is a busy mom of ten, doting grandma, and wife to John. A USA Today bestselling author, Tricia has published seventy books (including her brand new book that just came out this week: “The Grumble Free Year!”), and is a two-time Carol Award winner, as well as a Christy and ECPA Award Finalist.

She won the Retailer’s Best Award in 2015 and has received starred reviews from Romantic Times and Publishers Weekly. She is also on the blogging team at TheBetterMom.com and other homeschooling and Christian sites. Tricia is the founder of Hope Pregnancy Ministries and currently leads a teen MOPS Group in Little Rock, Arkansas.