How Do I Show Respect When My Husband is a Jerk?

Just because your husband is a jerk doesn’t mean you aren’t called to respect him. Here’s how to respect your jerk husband – without being a doormat. 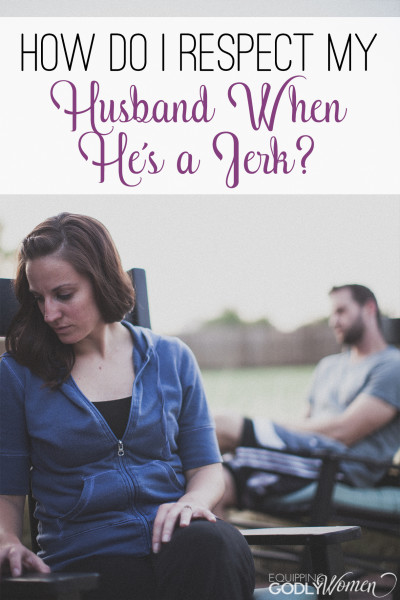 I don’t know about you, but respect has never come easily to me.

I’m fairly traditional and feminine (I’m not a tomboy by any means), but I am also strong, stubborn, opinionated, and self-centered at times. I’m a perfectionist, and I like to have things done a certain way.

It’s not my husband’s fault I’m not very good at respecting him. He’s a great guy! He definitely deserves all the respect I am called to give him. It’s my fault alone.

Unfortunately, for some of you, your situation may be different. Maybe you’re married to a man who truly makes respecting him difficult. Maybe your husband is a jerk.

Maybe he checked out emotionally years ago. Maybe he’s rude, forgetful, or you don’t feel like you can trust him with even the simplest of tasks, much less your heart. Maybe you feel more like roommates than lovers.

Maybe you’re in an unequally yoked marriage where he isn’t a believer, and he’s making it very difficult for you to grow in faith with the rude things he says about Christianity and about you for believing in it.

Let me be clear: I am NOT talking about a husband who is physically or emotionally abusive–(I address abuse and divorce here)–but when your mostly loving, caring husband is a jerk sometimes.

Maybe he realizes it, maybe he doesn’t. Maybe he has hurts and issues he’s dealing with under the surface, and they’re quickly becoming your issues too.

As a Christian wife, you know you are called to be respectful — even when your husband is a jerk — but how do you respect someone like that??

*This article contains affiliate links, which means if you make a purchase I may make a small commission at no additional cost to you. This helps cover the many costs of running this site and allows me to help provide for my growing family. Thank you!

1. Understand the True Meaning of Respect

Merriam Webster defines respect as “a feeling or understanding that someone or something is important, serious, etc., and should be treated in an appropriate way.”

Respect doesn’t mean you become a doormat, that you praise your husband in an over-the-top ridiculous way or that you can never have an opinion on anything. Respect simply means honoring the dignity of the other person–and recognizing their inherent worth as a human being created by God.

Respecting your husband does NOT mean making yourself unimportant or insignificant or completely excusing his behavior when your husband is a jerk and walks all over you.

It means that you don’t treat him like he’s inferior, like he’s a child, or like his opinions and preferences don’t matter. You value him and treat him honorably. You view your husband as God views him–as a dearly beloved child of God–and you act like it.

By the way… One book that has REALLY helped me learn how to respect my husband more is “Love and Respect” by Emerson Eggerichs. In fact, I’ve actually read it quite a few times now, and taken lots of notes.

It really opened my eyes to what men (in general) mean what they say “Respect” and gave me LOTS of ideas for very practical action steps I could take to be more respectful in my own marriage. Turns out, what I thought respect looked like and what my husband actually needs from me were totally different, and I was doing tons of disrespectful things without even realizing it or meaning to. (Yikes!)

If you also struggle with understand what it means to respect your husband and how you can go about that in a practical way, I highly, highly recommend this book! There’s even a workbook that goes along with it too, for those of you who are committed to change.

Oh, and I HAVE to mention–I LOVE the definition of respect Kristi shares in her article, How Submission Saved My Marriage. I literally laughed out loud and shared it with my husband. Though he didn’t find it quite as funny as I did.

2. Understand that Respect is a Command (Even When Your Husband is a Jerk)

Wouldn’t it be great if we could all just pick and choose which parts of the Bible we want to follow and ignore the rest? Well, it doesn’t work like that. When God commands us to do something, He expects us to listen. And in Ephesians chapter 5, God commands women to respect their husbands.

“Nevertheless, each individual among you also is to love his own wife even as himself, and the wife must see to it that she respects her husband.” –Ephesians 5:33

It says “the wife must see to it.” In other words, do it. Whether your husband is a jerk or he’s the sweetest man on Earth – YOU still have the responsibility to be the wife God created you to be.

Now, yes, it does say that the husband is supposed to love his wife as well. And if both the husband and the wife held up their end of the deal–respect would be easy! BUT you aren’t responsible for what your husband does; you’re responsible for you. And God commands YOU to be respectful.

*Related: 3 Ways to Fight For Your Marriage When You’re Busy and Exhausted

3. Put that Respect into Action (i.e. No More Thinking ” My Husband is a Jerk”)

Waiting until you feel like respecting your husband before you start acting like it? You may be waiting a while. Whether your husband is a jerk or a great guy, the way we feel about people is influenced in large part by the way that we treat them, talk about them, and even think about them.

So if you want to feel respectful to your husband, start with your own thoughts and actions first.

Now, every husband will feel respected in a slightly different way, so what works for one husband may not work for yours, but here are a few ideas to get you started thinking on how to build your husband up:

Related: 101 Ways to Respect Your Husband

And again, if you’re searching for practical suggestions, Love and Respect has tons of great ones. It is such a great resource for those who are committed to changing their marriage for the better. If you haven’t read it yet, you really should. (In fact, I probably should read it again…)

Yes, it will probably be hard at first. It’s won’t feel natural. It won’t be easy. But time and time again, when I’ve set my own feelings and emotions aside to do things God’s way, I have never, ever regretted it.

Do you struggle with respect when your husband is a jerk? What is it that’s getting in your way? Is it that you don’t want to respect your husband when he’s being a jerk or you just don’t know how?